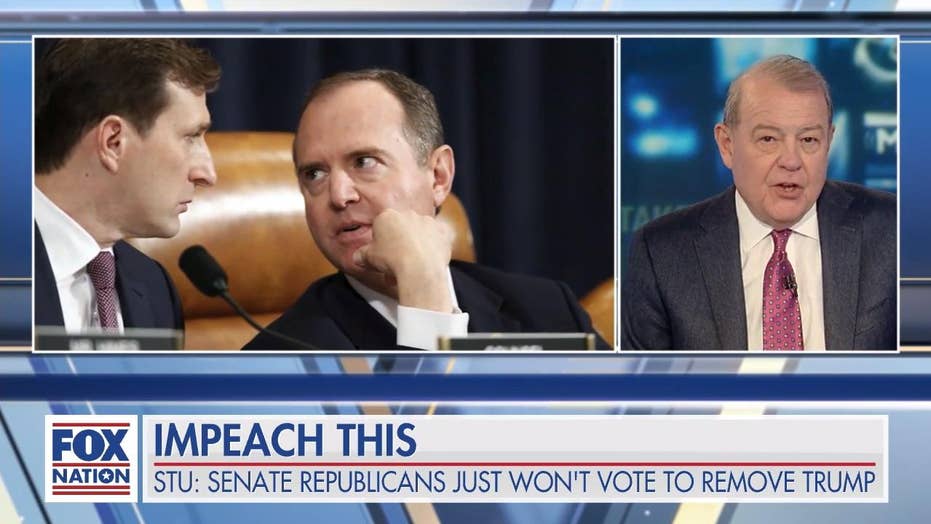 Varney on articles on impeachment: 'The Left thinks they've got' Trump, 'they're wrong'

"The Democrats are drawing up the articles of impeachment [against President Trump]. Well, that sounds ominous," said Fox Business host Stuart Varney. "The left thinks it's finally got him. They think he's being so slimed that he loses the election next year. They are wrong. In fact, the president, in my opinion, is looking good."

"The Democrats have made a huge mistake. And they're going to pay the price on this, the very day when impeachment charges are laid, the president's reelection chances look better and better," he added on Fox Nation's "My Take."

READ THE ARTICLES OF IMPEACHMENT

House Democrats on Tuesday introduced two articles of impeachment against President Trump alleging abuse of power and obstruction of Congress regarding his interactions with Ukraine, touching off a rapid-fire sequence that could result in a floor vote in a matter of days.

The two articles charge the president with committing  "high crimes and misdemeanors" -- charges Varney believes to be "narrow, legalistic and thoroughly obscure."

Absent from the articles is a “bribery” count, which Democrats have repeatedly accused the president of in regard to his controversial July 25 phone call with Ukrainian President Volodymyr Zelensky -- in which he encouraged Zelensky to investigate former Vice President Joe Biden and his son Hunter’s dealings with Ukraine.

Regardless of the outcome of the impeachment vote, President Trump will remain in office for the duration of his term, Varney explained.

"Republicans in the Senate will not vote to end his presidency," Varney said. "In fact, they may turn the tables and embarrass Democrats like Adam Schiff. And after endless televised hearings, there is no groundswell among voters to throw him out. Impeachment may turn out to be worse for Democrats than for the president."

An early November poll conducted by Democratic polling group Global Strategy Group found that 42 percent of those who were undecided on the issue of impeachment "feel exhausted" by the proceedings, while 27 percent said they feel "confused" by the process. Only 12 percent of these potentially convinceable voters said they now support impeachment following weeks of public hearings featuring key witnesses and legal experts.

The latest numbers appear to be bad news for House Democrats, who have tried to convince more Americans of the merits of impeaching President Trump through weeks of public hearings.

"America didn't pay much attention to those mind-numbing impeachment hearings," Varney said. "CNN went wall-to-wall with their Trump-hating, but their ratings over the Thanksgiving period hit a three-year low. The Trump hating media is losing," he continued.

"Instead, Americans are enjoying the most prosperous holidays in years," the Fox Business host said.

According to the latest Gallup poll, 55 percent of Americans consider the economy excellent or good, Varney explained.

"A hundred million of us directly benefit from the Trump market rally. Does anyone really believe that if a Democrat won next year, the economy would keep growing?" he asked.

Meanwhile, Republicans have blasted the impeachment process as partisan, dubbing it the "focus group impeachment" in response to reports that Democrats tested different allegations with focus groups.