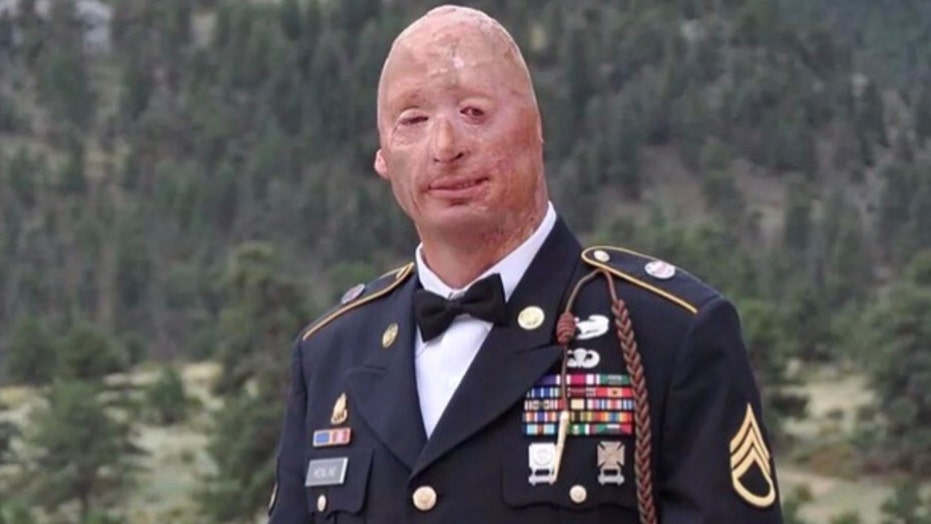 EXCLUSIVE: Wounded Army vet slams Democrats for using him as a ‘prop’ to turn veterans against Trump

In an exclusive interview, Bobby Henline, a four-tour Iraq War veteran and lone-survivor of an IED blast in 2007, spoke out against his image being used in anti-Trump ‘propaganda’ to perpetuate a widely disputed story that the president made disparaging comments about fallen American soldiers and veterans.

EXCLUSIVE: One U.S. wounded veteran is speaking out against his image being used across all social media platforms to further perpetuate a story he believes is false and made up by Democrats for political gain.

“I'm just so irritated that they put my image up there because now it looks like the president called me a loser."  Bobby Henline, a four-tour Iraq War veteran told Fox News referring to comments allegedly made by the president regarding wounded veterans. "And they're using that to sell something that they believe in for their agenda. It's not fair to put us [veterans] as props in the middle of all that,”

Last week, The Atlantic published a story in which anonymous sources claimed President Trump had made disparaging remarks about fallen U.S. soldiers and veterans, calling them “suckers” and “losers” in 2018.

Henline is the lone survivor out of five soldiers in an IED blast in Iraq. He now dedicates his time to spreading laughs through comedy and positivity by speaking about veteran’s issues. As a highly recognized figure, it was brought to his attention last week that his image was being used in anti-Trump memes posted in and shared by various left-wing social media groups. He quickly took to Instagram to criticize those using him in order to spread their own “propaganda.”

Having never commented on the Atlantic story or Trump’s supposed remarks about veterans, Henline was outraged that he was being used as a “prop” to aid the Democratic Party in tearing down Donald Trump to help their candidate, Joe Biden, get elected.

“Go on what you have with facts," Henline said. "If you don't have the power to win on your own merits, that you have to tear down your opponent, there is a problem there.”

The original story published by the Atlantic cited four anonymous sources claiming to have firsthand knowledge of the discussion in which Trump made the controversial comments. Since then, a number of people who placed themselves in the room during the reported conversation, including former U.S. National Security Adviser John Bolton, who has a rocky past with Trump, have stepped forward to deny that the president ever made those disparaging remarks. Henline said he believes the story to be false.

“I really believe the president didn't say this," Henline said. "There’s been anonymous sources and other sources in the room that aren’t necessarily friends with the president or believe in his ways, but they're still not gonna slam him and make up this rumor and keep it spreading. And so with that said, I don't think he really said this."

Although many doubt the veracity of the story, Henline believes it was successful in its intent to turn veterans against the president.

“Them taking that well-recognized photo and using it for their agenda and changing veterans' minds, thinking the president talks to them like that is ridiculous," Henline said. "And I believe it worked. And that's why I want to get it taken down because it shouldn't be working. People need to hear the truth. That's my image. And it should not be up there speaking for me,"

The stand-up comedian was quick to go after the accounts that posted these anti-Trump memes using his photos, and while he was successful in getting some taken down, more have continued to pop up.