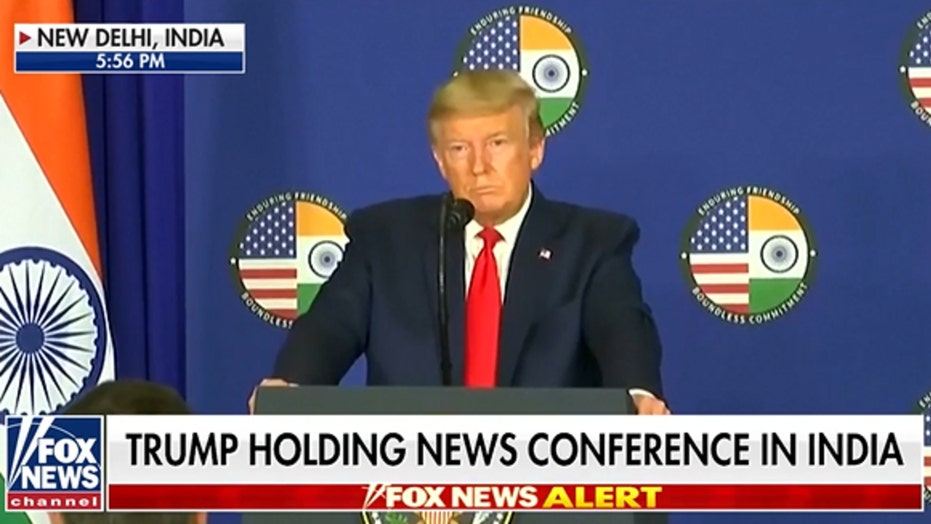 Trump clashes with CNN reporter: "You have worst record in history of broadcasting."

President Trump scolded CNN White House correspondent Jim Acosta on Tuesday during a press conference in India, telling the reporter he should be “ashamed” and blasting the liberal network.

Acosta asked Trump if he would accept foreign interference in the upcoming election and how he could justify replacing Joseph Maguire as acting director of national intelligence.

JIM ACOSTA'S CNN ROLE FURTHER MUDDLED BY BOOK: 'YOU CAN’T TELL THE DIFFERENCE BETWEEN HIM AND A PAID PUNDIT'

“First of all, I want no help from any country, and I haven’t been given help from any country,” Trump answered before referencing a report that CNN had to walk back on Sunday. “If you see what CNN, your wonderful network said, I guess they apologized in a way. Didn’t they apologize for the fact that they said certain things that weren’t true? Tell me, what was their apology yesterday? What did they say?”

Acosta fired back, “Mr. President, I think our record on delivering the truth is a lot better than yours sometimes.”

CNN’s Jim Acosta has become a hero among liberals for his combative style when questioning President Trump. (AP Photo/Evan Vucci)

Trump responded by attacking the credibility of Acosta and CNN.

“Your record is so bad that you ought to be ashamed of yourself. You have probably the worst record in the history of broadcasting,” Trump said as Acosta attempted to interrupt.

“Your record is so bad that you ought to be ashamed of yourself. You have probably the worst record in the history of broadcasting."

The combative Acosta then asked if the acting director of national intelligence will have experience in the field.

“Yes, we’re talking to five different people right now. I think all people that you’d know, all people that you respect and I’ll make a decision probably over the next week to two weeks,” Trump said. “We have some very good people.”

Acosta then asked if Maguire was “forced out because he wasn’t sufficiently loyal” to the president.

Acosta quickly became a trending topic on social media after the argumentative exchange, with many criticizing the reporter's behavior:

Trump and Acosta have sparred on a regular basis over the past four years. The CNN reporter emerged as a hero among progressives early in Trump administration. He also made a habit of shouting questions and feuding with former press secretaries Sean Spicer and Sarah Sanders.

Acosta’s star has fizzled as the White House has reduced the number of press briefings in favor of gaggles and interviews, limiting Acosta’s opportunity to draw attention to himself.

The CNN reporter was briefly banned from the White House back in 2018 after engaging in a contentious back-and-forth with Trump during a press conference, in which he seemed to refuse to pass the microphone to a female White House aide.

Acosta’s press pass was eventually restored after CNN argued that keeping him out of the White House violated the network and Acosta’s First and Fifth Amendment rights.

Acosta’s 2019 book, “The Enemy of the People: A Dangerous Time to Tell the Truth in America,” was billed as “an explosive, first-hand account of the dangers [Acosta] faces reporting on the current White House while fighting on the front lines in President Trump’s war on truth” as “public enemy number one.”