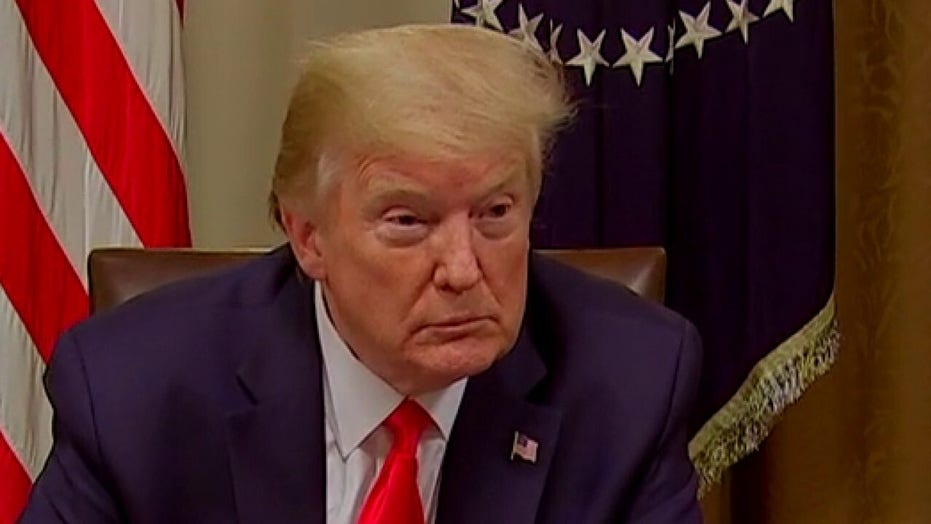 Donald Trump is now fed up with the daily White House briefings that became the centerpiece of his presidency in the coronavirus era.

He bragged about the “Bachelor”-level ratings, enjoyed targeting opponents--especially network reporters--and, along with his team of advisers, would let the sessions run for as long as two hours.

In the process, Trump brushed off increasingly urgent advice from his own allies that the briefings were hurting him as they became a marathon of mixed messages, clashes with medical experts and bitter exchanges with journalists.

That advice reached a crescendo after Trump mused about finding a cure involving injecting disinfectant or ultraviolet light into the body, followed by a White House statement accusing the media of taking him out of context, followed by his declaration that his comments had been purely sarcastic.

I’ve seen plenty of instances where the press has taken joking or tongue-in-cheek lines from Trump and blown them way out of proportion. This wasn’t that. The reaction was so negative that federal health experts, state and local officials, and even Lysol, rushed out statements telling Americans not to inject bleach.

And that led to this Saturday tweet in which the president abruptly changed strategy while blaming the press:

“What is the purpose of having White House News Conferences when the Lamestream Media asks nothing but hostile questions, & then refuses to report the truth or facts accurately. They get record ratings, & the American people get nothing but Fake News. Not worth the time & effort!”

That came after Trump took no questions at the Friday briefing, and the Saturday and Sunday pressers--a staple of cable news since mid-March--were canceled. So it appears, at the very least, the briefings are being cut back.

The irony is that liberal commentators at MSNBC, CNN and elsewhere have been insisting that their networks and Fox stop airing the news conference because they view Trump as peddling lies and misinformation. Now he’s using them as justification for holding fewer briefings.

To say that Trump has gotten “nothing but hostile questions” simply isn’t true. There’s no shortage of grandstanding in the briefing room, but many of the questions challenge his policies on matters like testing and ventilators, as well as why he didn’t move more quickly in some areas. The president seemed to relish these battles. And the disinfectant business didn’t start with a reporter, but with Trump speculating with two members of his task force. In tennis, that’s called an unforced error.

“When will all of the ‘reporters’ who have received Noble Prizes for their work on Russia, Russia, Russia, only to have been proven totally wrong (and, in fact, it was the other side that committed the crimes), be turning back their cherished ‘Nobles’…” And yes, beyond the misspelling, he must have meant Pulitzer Prizes.

And then he invoked the sarcasm defense again:

“Does anybody get the meaning of what a so-called Noble (not Nobel) Prize is, especially as it pertains to Reporters and Journalists? Noble is defined as, ‘having or showing fine personal qualities or high moral principles and ideals.’ Does sarcasm ever work?”

Usually not when you have to explain it after the fact.

The president also hit the Washington Post after his press secretary complained that her quote was buried in one story: “They are one of the worst in the ‘news’ business. Total slime balls!”

And he reprised his complaint against Fox News for being politically correct by covering Democrats: “They are being fed Democrat talking points, and they play them without hesitation or research. They forgot that Fake News @CNN & MSDNC wouldn’t let @FoxNews participate, even a little bit, in the poor ratings Democrat Debates...” Actually it was the Democratic National Committee, not rival networks, that froze out Fox, only to see most of the candidates do town hall forums on the network.

Trump also lambasted the New York Times over a story that described him showing up in the Oval Office as late as noon, “usually in a sour mood after his morning marathon of television.”

The Twitter rebuttal: “I work from early in the morning until late at night, haven’t left the White House in many months...and then I read a phony story in the failing @nytimes about my work schedule and eating habits, written by a third rate reporter who knows nothing about me.”

That wasn’t all, The White House worked with the New York Post on a knockdown piece, granting access to such officials as chief of staff Mark Meadows, who said “the biggest concern I have as a new chief of staff is making sure he gets some time to get a quick bite to eat. I can tell you that he will go back in and have a lunch just off the Oval Office and more times than not it is interrupted by several phone calls.”

And I know that Trump never goes dark for long. Soon after canceling yesterday’s coronavirus briefing, he held a solo Rose Garden news conference--in the same time slot--and sparred with reporters on a wide array of subjects.