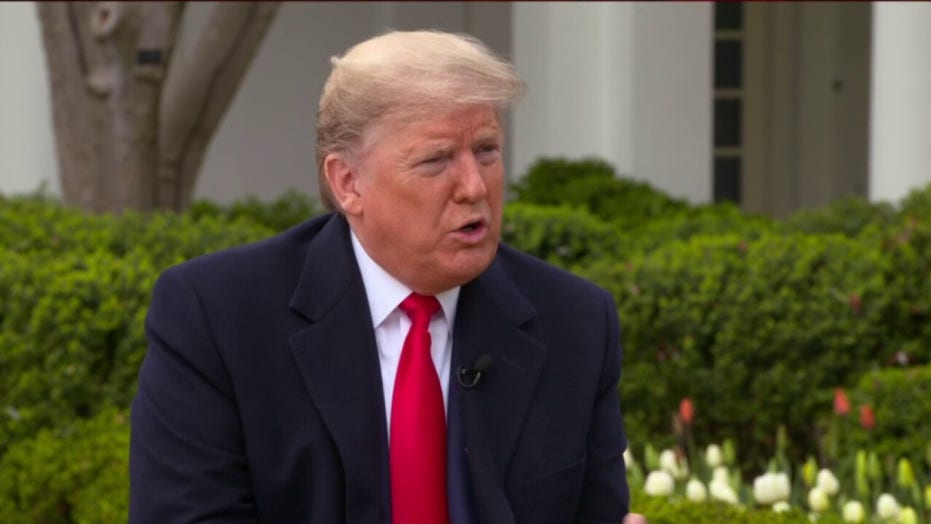 Trump on COVID-19 relief bill hang up: 'No way I’m signing that deal' with 'Green New Deal stuff' in it

President Trump said Tuesday that he would not support an emergency coronavirus response bill pitched by House Democrats earlier this week.

“Nancy Pelosi came and put a lot of things in the deal that had nothing to do with workers -- that had to do with an agenda that they have been trying to get passed for 10 years,” Trump told Fox News in a special “Virtual Town Hall.”

“I came in, I told Mike [Pence], I told a lot of people, 'There is no way I am signing that deal," the president added.

"[The Democrats said] 'We want green energy, let’s stop drilling oil' -- they had things in there that were terrible," Trump said. "Windmills all over the place and all sorts of credits for windmills -- they kill the birds and ruin the real estate. A lot of problems.”

US WAS MORE PREPARED FOR PANDEMIC THAN ANY OTHER COUNTRY, JOHNS HOPKINS STUDY FOUND

The president's comment came one day after Senate Democrats blocked legislation from moving forward for a second time, claiming the plan did too much for large corporations and not enough for workers. Republicans accused them of playing politics and using the crisis as leverage to try and jam through unrelated political “wish list”.

Treasury Secretary Steven Mnuchin said Tuesday that "we're very close" to a deal in the Senate.

But the House is another matter.

The House Democratic proposal does not contain the "Green New Deal," as Trump's tweet suggested, but it does call for airlines that take federal aid to reduce their overall carbon emissions by 50 percent by 2050.

The bill also contains provisions to eliminate debt held by the U.S. Postal Service, require same-day voter registration, pay off $10,000 in student debt per person, and force federal agencies to explain to Congress how they are increasing their usage of “minority banks.”