Bobulinski’s interview will air during "Tucker Carlson Tonight" on Tuesday.

Tony Bobulinski, a former business associate of Hunter Biden, believes Joe Biden essentially served as the "chairman" and a "figurehead" to his son’s overseas business dealings.

Bobulinski, a retired lieutenant in the U.S. Navy, is the former CEO of SinoHawk Holdings, which he has long said was a partnership between a Chinese energy firm and the Biden family. During an exclusive interview that will air Tuesday night on "Tucker Carlson Tonight," Bobulinski said he met with President Biden "multiple" times prior to the 2020 election to discuss his son’s business ventures.

"There are hundreds of data points that Joe Biden was acting in – in a capitalistic term, I would say the chairman," Bobulinski told host Tucker Carlson.

Tony Bobulinski sat down with Tucker Carlson for an exclusive interview set to air on Tuesday. (FOX)

"The chairman of JPMorgan doesn't take eight meetings down with the people, you know, analyzing companies. The chairman serves a purpose, right? He's a figurehead," Bobulinski continued. "He shows up in meetings, shakes hands, advises, you know, has faith in his team. Effectively, that was Joe Biden's role in the Biden family business ventures and around the world. And not just my venture."

Fox News’ Mike Emanuel previously reported that Hunter once made a reference to "my Chairman gave an emphatic no," in a text message. A source familiar told Emanuel that when Hunter talked about his "Chairman," he was referring to his father.

Bobulinski said Joe Biden has been playing that role "dating back decades." He said a leaked 2018 voicemail in which he told his son "I think you’re clear," following a New York Times report about Hunter’s work with a Chinese corporation, contradict the sitting president's claims.

"Joe Biden was adamant to the American people that he had no knowledge of his family's business deals," Bobulinski told Carlson. "How, if he had zero knowledge of that, could he be telling his son that he's in the clear on an article?" 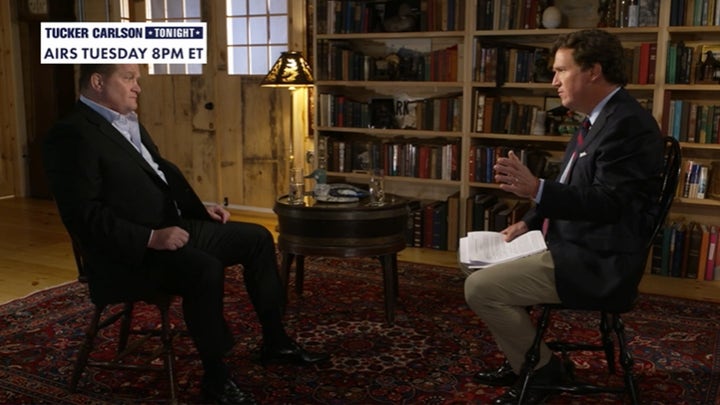 Bobulinski also accused Hunter Biden of "fraud" against his business partners by tampering with key documents to funnel over $5 million into a company he owned during the latest sit-down with Carlson.

Bobulinski, who previously spoke to Carlson in 2020, insists the Biden family has aggressively leveraged its famous last name to make millions from foreign entities. He initially said he wouldn't have gone public with his story had House Intelligence Committee Chairman Adam Schiff's comments saying his claims were part of a "Russian disinformation" campaign been retracted. This time, he is speaking out once again after he feels the FBI didn’t properly handle his claims.