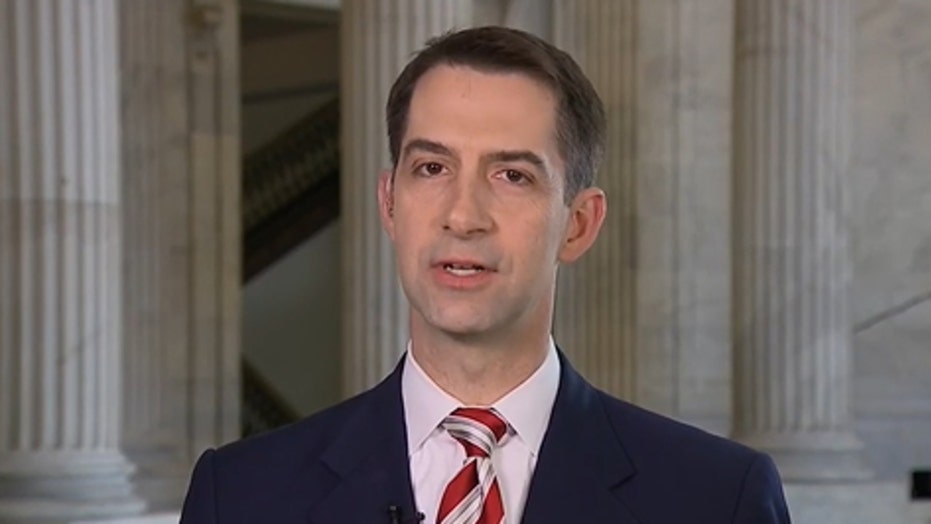 While Sen. Chuck Schumer, D-N.Y., faces controversy for his comments about Supreme Court justices during an abortion rally, Sen. Tom Cotton, R-Ark., said on Thursday that the “real issue” is the Democrats’ radical views on abortion.

“Let’s get to the root of the issue here,” Cotton told “America’s Newsroom.” “Chuck Schumer and the Democrats filibustered legislation that would prevent infanticide of a young baby that survives an abortion, prevent late-term abortion of infants that can feel pain in their mother’s womb. These are depraved practices that no civilized society should permit, yet, the Democrats are so radical on abortion that they’d filibuster those bills in lockstep. That’s the real issue at stake here.”

The Democratic New York senator made the statement during an abortion rights rally hosted by the Center for Reproductive Rights as the court was hearing arguments in a case over an abortion-related Louisiana law. "I want to tell you, Gorsuch. I want to tell you, Kavanaugh. You have released the whirlwind and you will pay the price!" Schumer said. "You won’t know what hit you if you go forward with these awful decisions."

After McConnell's remarks, Schumer took to the floor and began by claiming that McConnell made a "glaring omission" by not mentioning that he was speaking about a Supreme Court case that could impact women's ability to get an abortion. He then admitted that he chose the wrong words to convey his message.

"Now, I should not have used the words I used," Schumer said. "They didn't come out the way I intended to."

Schumer insisted he in no way meant to threaten Associate Supreme Court Justices Neil Gorsuch and Brett Kavanaugh, and that McConnell knows this. He claimed he was referring to the political consequences the case could have.

"It'd better if he would just flatly apologize and move on with serious business, like, perhaps, trying to protect the lives of the unborn and protect women from very dangerous medical circumstances," the Arkansas senator said.