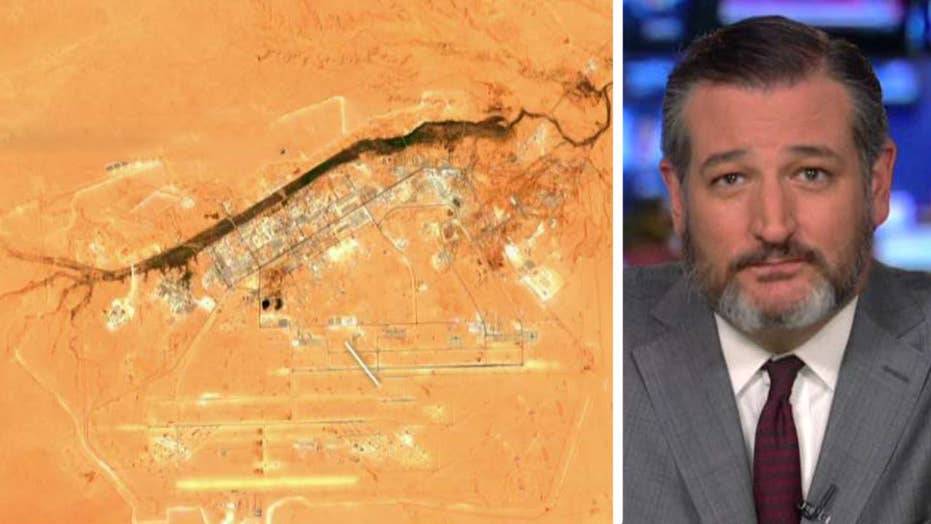 Sen. Ted Cruz, R-Texas, said Tuesday he believed the missiles Iran launched at Iraqi airbases where American soldiers are stationed were "in a very real sense" paid for by the billions of dollars the Obama administration sent to Tehran in 2016.

"If you look at Iran policy, I think you've seen a dramatic shift [under President Trump]," he said. "Under Barack Obama, as you noted, the policy was appeasement. The policy under the disastrous Iran nuclear deal under Obama was to give over $100 billion to Iran."

Cruz recalled how $1.7 billion in cash was sent via airliner to Iran -- "on pallets, in the dead of night."

"In a very real sense, the missiles that we saw fired on U.S. servicemen and women tonight were paid for by the billions the Obama administration flooded the ayatollah with," he said, "If history teaches anything, it's don't give billions of dollars to people who hate you and want to kill you."

Cruz told host Sean Hannity that Iran continues to be "exceptionally dangerous," America under Trump is not likely to become enmeshed in a new war in the Middle East and that "hysteria" from Democrats and the press is simply an extreme expression of both entities' hatred of the president.

In the past, the Texan added, Americans would come together across party lines to defend U.S. action against malevolent forces like terrorists.

Instead, he said the Democrats are "lighting their hair on fire" and cautioning about an allegedly impending "World War III."

The act was a major retaliation by the rogue regime after the U.S. airstrike that killed Iranian Quds Force Gen. Qassem Soleimani last week.

Ten missiles hit Al-Assad Air Base, one missile hit a military base in Erbil and four missiles failed to hit their targets, according to a U.S. military spokesman for Central Command, responsible for American forces in the Middle East. The attacks unfolded in two waves, each about an hour apart. Initial assessments showed "no U.S. casualties," a U.S. military official in Baghdad told Fox News.

President Trump tweeted a response late Tuesday evening: “All is well! Missiles launched from Iran at two military bases located in Iraq. Assessment of casualties & damages taking place now. So far, so good! We have the most powerful and well-equipped military anywhere in the world, by far! I will be making a statement tomorrow morning.”