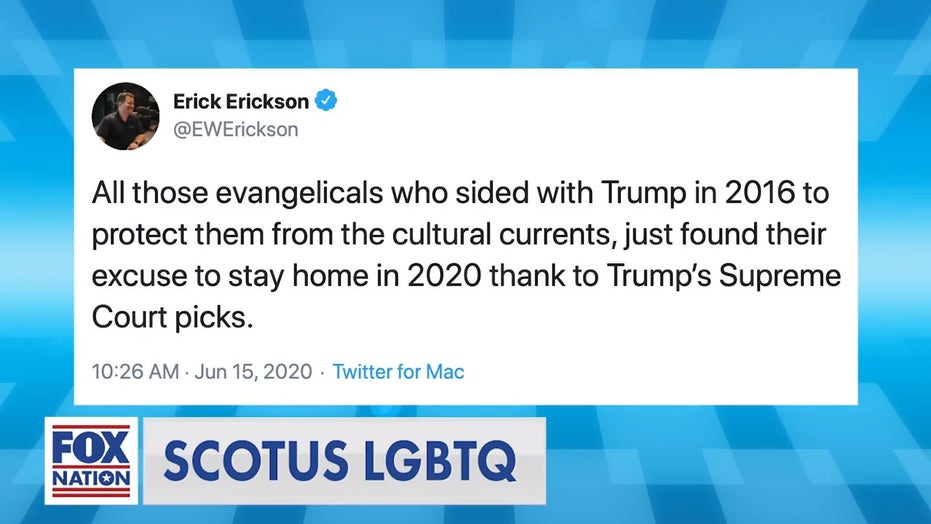 U.S. Supreme Court Justice Neil Gorsuch, who was nominated by President Donald Trump, has drawn criticism from some conservatives after writing the opinion in a landmark ruling -- finding that employers cannot legally fire employees for being gay or transgender.

Erick Erickson, the editor of The Resurgent and host of the Erick Erickson Show, said that many American evangelicals may now reconsider their support for President Trump in 2020.

In Tuesday's episode of "Final Thoughts," Fox Nation's Tomi Lahren argued that the conservative ideology should be inclusive enough to accept the Supreme Court decision.

"You can be Christian, conservative, and a proud Trump supporter and believe people should not be fired for who they love or the lifestyle they lead outside of the workplace," said Lahren.

Lahren argued that condemnations from the "conservative thought police" also discourage young people from joining the Republican party and the conservative cause.

"Attempting to take away someone's conservative card for being pro-choice or pro-same-sex marriage or pro-protecting good and decent people from true discrimination in the workplace is why so many young people don't feel the conservative movement is their movement," she continued, explaining that she often hears this complaint from her peers.

"Conservative doesn't come in one flavor, one race, one religion, one gender or one sexuality or even one defined and rigid set of values," she added, "and I won't sit by quietly and allow certain self-righteous and self-appointed and anointed conservative thought policemen make that decree."

"That whole cancel culture thing doesn't look good on anyone, but it looks especially ugly on so-called conservatives," Lahren concluded.