Scaramucci: Trump has politicized the news around the coronavirus pandemic

Anthony Scaramucci, who was once a Trump supporter and White House communications director, clashed Sunday night with Fox News' Steve Hilton, the host of "The Next Revolution," after he criticized President Trump for essentially failing at every turn in the White House and how there is a need to "re-engineer" the entire Republican Party.

The tense exchange caught the attention of the president late Sunday who dismissed Scaramucci as a "loser" who made a fool of himself.

In his first appearance on Fox News since declaring his support for Biden, Scaramucci, who was fired after just 10 days as White House communications director and has since become one of Trump's fiercest critics, did not mince words when it came to his former boss.

"Number one, the economy is upside down," he told Hilton. "You had 13% unemployment for the African American community.

"Number two, he's [Trump] politicized the science around the pandemic....and the last thing in the most important thing for me, about the Republican Party, we are shrinking, and so in order to expand the tent, we have to reframe and reengineer the Republican Party," he said.

Scaramucci recently teamed up with former officials from the Bush and Trump administrations to launch The Right Side PAC, a super PAC to turn out disaffected Republican voters for the former vice president and presumptive Democratic nominee.

The interview took a turn when Hilton pressed Scaramucci over his support for Biden's policy platforms, relating specifically the economy and Biden's plans to uproot the Trump administration's deregulation agenda. 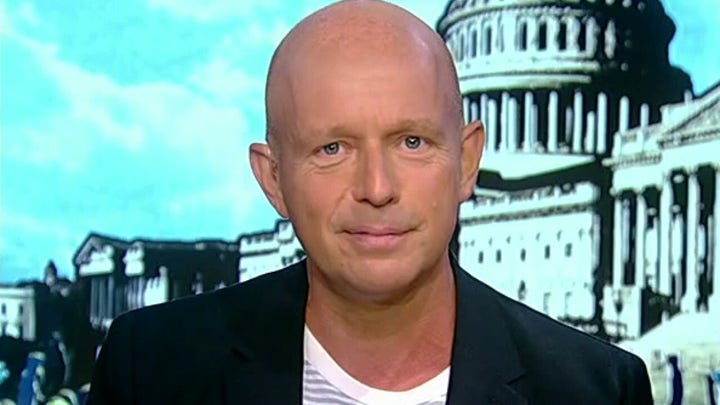 "Let's start with regulation, an important issue for every small, business out there for jobs and growth. In 2016 Anthony you said that regulation is crushing growth. Now you want it much higher than it was then," Hilton said. "Why?"

"That's not what I want," Scaramucci fired back.

Hilton countered, "But it is because you're backing Joe Biden who wants that, too. You're backing those policies. If you don’t want it why are you backing the candidate who supports that?"

Scaramucci then attacked Trump for "the way he treats people," claiming that "he bullies suburban housewives on his Twitter feed," -- but stopped short of answering Hilton directly.

When Scaramucci accused Trump of "blowing a racist dog whistle," Hilton was quick to point to several of Biden's recent troubling remarks on the issue.

"You go on about racism [but] you're now supporting a candidate who keeps saying racist things," Hilton said. "He literally just said the other day he thinks Black people are all the same."

Scaramucci reiterated his contempt for the president several times leading Hilton to declare, "You're all over the place and you talk about politics because you don’t want to talk about the policy."

"First of all that's totally not true," Scaramucci responded. Further defending his support of  Biden, Scaramucci told Hilton that he is "playing the long game."

" I can't speak for the other never Trumper Republicans but I'm playing the long game. I'm looking at the future, I'm looking at my millennial children and I'm looking about how we are going to re-knit the party so we can make that an all-inclusive party and the principles of that party.

"What we are doing right now, we've destroyed the economy, we are dividing the people, we are racially charging, that's not going to work," he said.

Trump lashed out at his aide-turned-nemesis on Twitter moments after the interview, writing "@Scaramucci who just made a fool of himself as he got taken apart by @SteveHiltonx  only lasted 11 days in his favorite of all time Administration, before being fired for, again, making a fool of himself. Anthony is a loser who begged to come back," Trump claimed. "I said “No Thanks”.