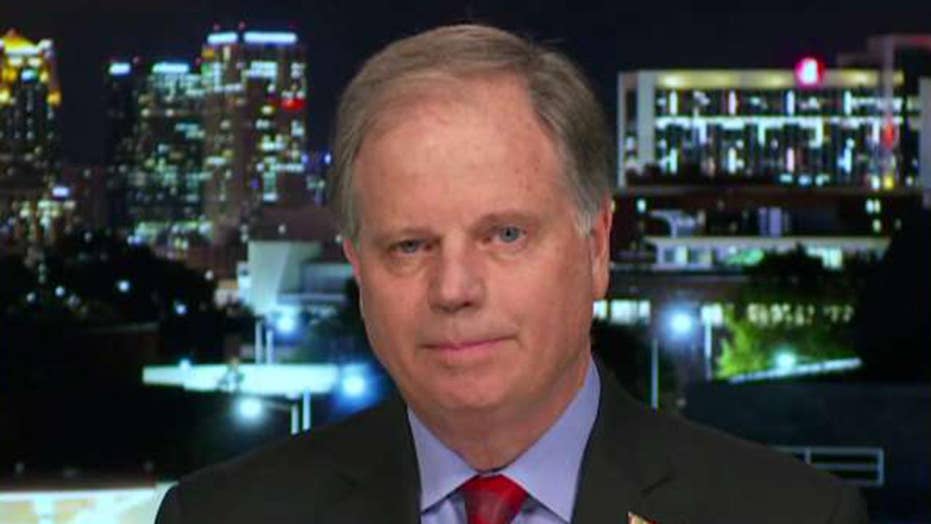 Sen. Doug Jones: Outrage over Nancy Pelosi withholding articles of impeachment is much ado about nothing

Alabama Sen. Doug Jones, Democratic member of the Senate Armed Services Committee, vows to be an impartial juror and says he won't consider articles of impeachment through a partisan lens.

Jones told "Special Report" host Bret Baier that it is imperative for the Senate to call witnesses that may have "first-hand" information about the context of the impeachment articles.

He added that once the trial rules are determined, senators will have a second opportunity to vote on calling witnesses. Jones told Baier he will similarly vote in favor of testimony.

Baier asked Jones if his stance could cause him political problems, as Jones is widely seen as the most endangered Democratic senator up for reelection in November. The anchor noted Trump won Alabama by a wide margin in 2016 and the state's other senator, Richard Shelby, is a Republican like the president.

Jones said he isn't looking at impeachment through a "partisan lens" or taking a stand for political opportunism. He disagreed with the sentiment that he must choose between pleasing his caucus' leader, Sen. Charles Schumer, D-N.Y., or Alabamans that oppose Trump's impeachment.

His guide, Jones said, is his oath of office:

"I want to make sure to examine all the evidence we have in front of us and vote in a way that I think is consistent with my obligations as a senator," he said.

Regarding the three-week impeachment stalemate caused by House Speaker Nancy Pelosi, D-Calif., holding onto the impeachment articles, Jones remarked the outcry on the right was "much ado about nothing."

He said it took a similar amount of time for the House to pass articles to the Senate during the impeachment of President Clinton.

Turning to the topic of Trump's airstrike that killed Iranian Gen. Qassem Soleimani, Jones said he is happy that the infamous terrorist is dead, but took issue with the president failing to inform Congress in adherence to the War Powers Act of 1973.

"It's about whether or not Congress ought to be able to have its constitutional role -- that is to be involved in any military escalation," he said. "It does not mean the president cannot take unilateral action to protect American interests in a defensive mode. But what it means [is] before we escalate with military action, he should come to Congress, for that's what the Constitution requires."