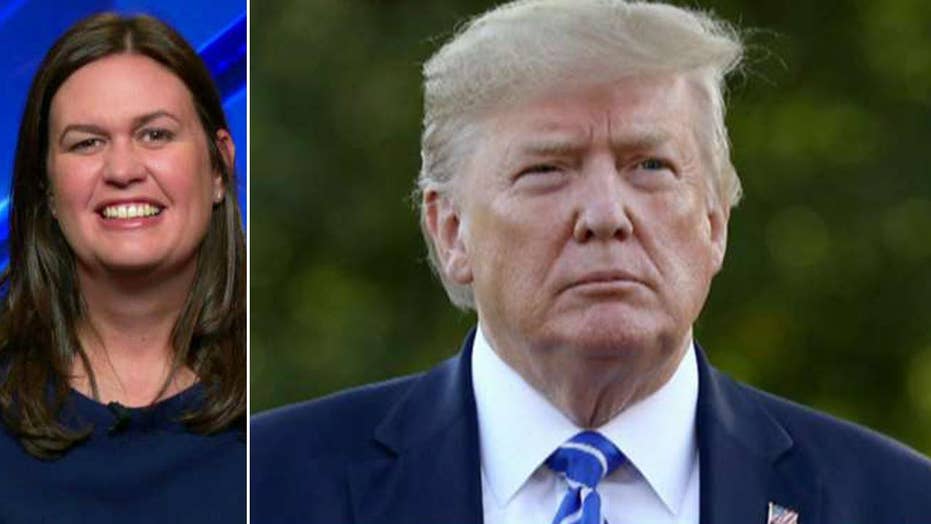 Sarah Sanders: No surprise that voters are souring on impeachment

Former White House press secretary Sarah Sanders said Saturday she isn’t surprised by a recent poll that shows support for impeachment among independents has gone down by 14 percent.

“We knew all along there was no scandal here," Sanders told "Justice with Judge Jeanine" host Jeanine Pirro, regarding the Emerson University poll showing support among independents moving from 48 percent in October to 34 percent in November.

“It was a complete scam that was dreamt up by Adam Schiff," she said. "Another hoax. He failed with the Russian hoax, so now he came up with this big process to try to distract America from all the good things the president is doing.”

Sanders said after two weeks of listening to witnesses admit “to not witnessing anything” the impeachment process has “completely tanked and people are sick and tired of watching it.”

“It was a complete scam that was dreamt up by Adam Schiff. Another hoax. ... People are sick and tired of watching it.”

She added that voters want Congress to “get something done” rather than focusing on impeachment.

“All [Democrats] can do is attack this president and people are paying attention to that and the numbers are reflecting it,” she said.

Sanders confessed she hoped there wouldn’t be an extended Senate trial because she wants candidates like Sens. Bernie Sanders and Elizabeth Warren out on the campaign trail to show their “clear contrast” with President Trump.

“I think the Democrats are going to keep losing and for some reason they can’t figure out why attacking the president is never going to work,” she said. “One, he’s tougher than they are, he’s smarter than they are and he’s always going to end up beating them.”

She added that Democrats would be better off trying to work with the president.

In testimony, Trump mega-donor and U.S. Ambassador to the European Union Gordon Sondland testified there was a quid pro quo with Ukraine but none of the witnesses testified that a bribe took place. Sondland's testimony contradicted a previous statement of his, in which he had said Trump insisted there be no quid pro quo in dealing with Ukraine.