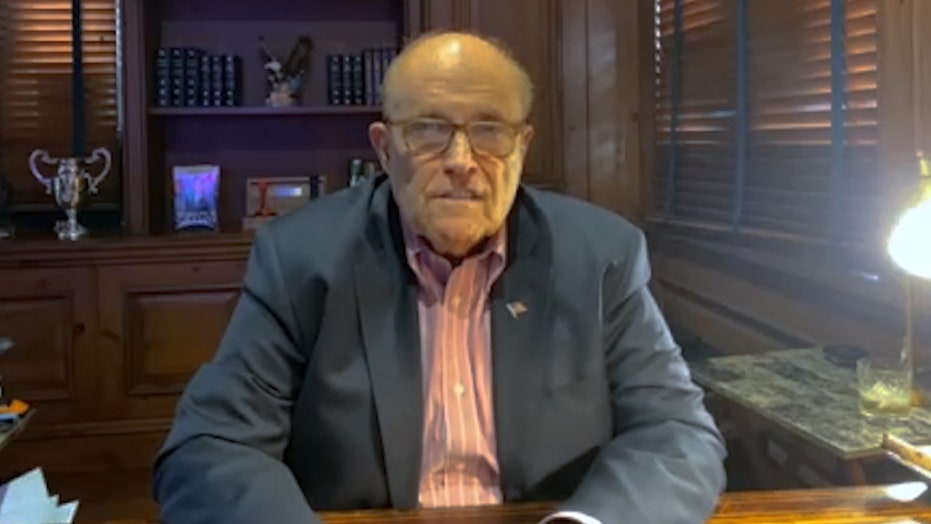 Former Mayor of New York and President Trump’s personal attorney, Rudy Giuliani, spoke to Fox News Digital about the failures of Mayor de Blasio's leadership, and how he would fix New York’s crime problem if he were in charge today.

Mayor Bill de Blasio, of New York, is to blame for the rising number of shootings in the city,  Rudy Giuliani, the city's former mayor, said.

The former mayor blamed de Blasio's bad realtionship with city police, the disbandment of the NYPD's anti-crime unit and the current mayor's disinterest for the rise in crime.

“Within a few short months, the city that's been the safest large city in America for 20 years under me and Bloomberg is now becoming maybe the second or third most dangerous city after Chicago,” Giuliani told Fox News.

New York City has experienced a troubling few months, as the world watches one of the most prosperous cities become overrun with violent crime.  Many are reminded of a time in the late 1970s when New York was known for its lawless streets.

In July of this year, there were 244 shootings in New York, according to NYPD data. That's compared to just 88 in July of 2019, which is a 177% increase. However, under Giuliani, crime in New York decreased by 57% and a there was a drop in homicides of 65%.

“I have no doubt I could reduce the emergency,” Giuliani said. “And in about six months I could have the crime declines going in exactly the right direction again. Except you just wouldn't have to pay attention, which I wouldn't, to Black Lives Matter, Al Sharpton and all these racial hucksters.”

The former mayor, who held office from 1994 to 2001, turned New York from one of the most crime-ridden cities to one of the safest in the country. The former mayor and federal prosecutor credited with taking down New York City mafia bosses in the 1980s, fears he is watching his favorite city heading down a dark path.

When asked how he would put an end to the violence, the former mayor said first he would re-form the anti-crime unit, created by him, which was disbanded by the current Mayor, Bill de Blasio, in June.

“I know how to use them. I'd go sit in the CompStat room, which I'm sure comrade de Blasio doesn’t even understand, and I would look at the three to four most affected places by crime, I'd concentrate my police there for a while to get it under control.”

One of the key obstacles the city faces is de Blasio’s fractured relationship with the police department, which Giuliani claims is one of the most important relationships as mayor of a large city.

“They hate him. They despise him. They feel that he's going to turn on them at every opportunity that he gets in order to satisfy Black Lives Matter or some other radical anti-American hate group.”

Mayor Bill de Blasio and police officials have offered counter-explanations for the rise in violence, including the ongoing coronavirus pandemic, the closure of courts and a general rise in anti-cop sentiment.

According to Giuliani, the current mayor, like many other Democrats, has adopted a “pro-criminal, anti-police philosophy,” which he believes is political posturing in an attempt to secure votes.

“The people in New York, unfortunately, vote in Pavlovian democratic way,” said Giuliani. “Somehow the American people are just going to have to wake up to the fact that Democrats have lost their way. They no longer think about the good of the people. They just think about how they can get power back. In doing that, they're really costing us lives.”

During the past few months, de Blasio has criticized the federal government a number of times for not bailing the city of New York out from the deep financial hole they are in.

At the end of June, when passing the annual budget, the mayor had to make significant cuts to the city’s more than $89 billion budget, which included shifting $1 billion from the NYPD to programs that assist youth and community development. De Blasio advocated for the budget cut, which came just as the city announced plans to disband the police force's plainclothes anti-crime unit in an effort to build "trust with the community through respect, accountability, and transparency."

Giuliani, who is a personal attorney to President Trump, says he “wouldn’t give de Blasio a penny" because of a mental health intiative run by Chirlane McCray, the mayor's wife, who spend $900 million in 2019 for ThriveNYC, a mental health initiive.

“The president couldn't possibly have any assurance that the money he's giving to de Blasio would get to help people,” said the former mayor. “This city has become --  not just a very --  extremely anti-American. This city's become corrupt under him.”