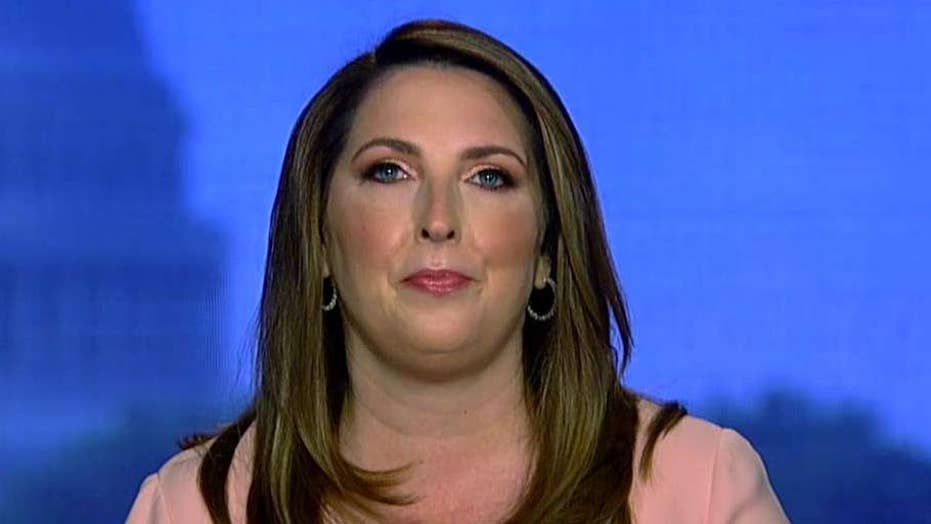 RNC: Trump 2020 campaign booming with women voters across the country

Ronna McDaniel says the president's campaign is doing well with women across the country.

Appearing on “America’s Newsroom” McDaniel told host Sandra Smith: “Listen, women right now can’t vote, but they can vote with their pocketbook. Over 50 percent of the smaller donations coming to the Trump campaign are from women. That’s more than any other Democrat.

“So, we are seeing momentum with women across the country,” she emphatically stated.

On Tuesday, the campaign launched its initiative to court female voters in suburban Pennsylvania. The “Women for Trump” kickoff was led by the president’s daughter-in-law Lara Trump.

RNC RAKES IN A RECORD $20.8M FOR JUNE AMID SKY-HIGH Q2 NUMBERS

Lara Trump, who was joined by McDaniel, said at the event she likes to ask women: “Is your life better now than it was before Donald Trump got elected? Do you have a little more money in your bank account, did you get a break on your tax return this year?”

The demographic has been reluctant to back the president and his approval rating among women is down. A recent WSJ/NBC poll showed that 59 percent of suburban women disapproved of the president, while 38 percent approved. According to exit polls, the president won 41 percent of the female vote in 2016. The president has long been criticized for vulgar rhetoric about women.

But, McDaniel said the president has delivered on his promises from the 2016 campaign trail. She mainly stressed positive economic metrics.

“Your unemployment for women is at a 60 year low. For Hispanics and African Americans, it’s at an all-time low,” she urged. “I mean, this is the thing that’s disconcerting about the media; they want to focus on the tweeting and the rhetoric. But, American voters across the country, they’re interested on the policy and how it’s affecting their lives.”

“And, Americans across this country aren’t interested in the beltway,” she said. “They recognize that their lives are better, their wages are up, jobs are coming back, their families are doing better, and that is because of President Trump.”

“They know the Democrats have delivered a giant goose egg,” McDaniel said. “We’re raising record dollars. We’re in these states. But, I will tell you the enthusiasm is at an all-time high and we’re going to see it again in North Carolina when the president goes to his rally tonight.”