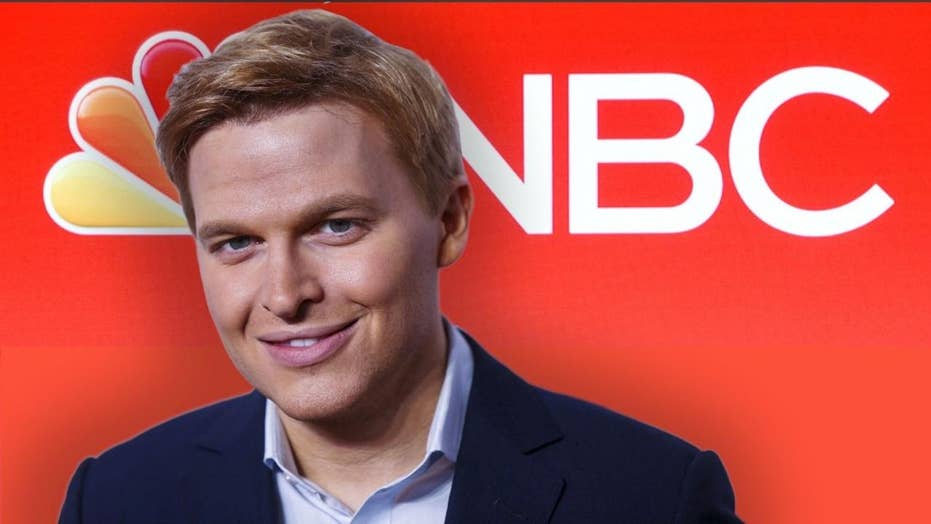 Ronan Farrow was tight-lipped about his highly anticipated book “Catch and Kill” until the Pulitzer Prize-winning reporter spoke to The Hollywood Reporter about the top-secret project.

Farrow was an NBC News employee when his reporting on now-disgraced Hollywood mogul Harvey Weinstein helped launch the #MeToo movement in 2017. NBC has long claimed that Farrow’s reporting, as presented to it, was not fit to run with. Farrow’s work ultimately appeared in The New Yorker, which is known for its vigorous fact-checking, so numerous theories have since been floated about why the Peacock Network passed.

The son of Mia Farrow and Woody Allen has been expected to tell his side of the NBC saga in “Catch and Kill.” But it's just one of the bombshells he shared with The Hollywood Reporter’s Marisa Guthrie in an interview published on Wednesday, along with information from Guthrie's advance look at the book in an office at publisher Little, Brown.

NBC News did not immediately respond to a request for comment to a series of questions about Farrow's interview with The Hollywood Reporter.

Fox News has not seen the book, that is scheduled to be released on Tuesday. But here are six takeaways from Farrow's blockbuster interview:

Weinstein attempted to “bully” NBC News into killing the story by leveraging information about then-NBC News anchor Matt Lauer, according to Guthrie. An executive from National Enquirer publisher American Media helped Weinstein formulate a plan to silence NBC News, according to Guthrie, and the duo found a “pressure point” against the network when he learned of alleged behavior by Lauer.

"Weinstein made it known to the network that he was aware of Lauer's behavior and capable of revealing it." The book documents "a period in which secrets at NBC were under threat of exposure," Farrow wrote in his book, according to Guthrie. "And it is very clear from the conversations I document how heavily those secrets weighed on their [reporting] judgment."

In a statement to THR, NBC News denied this claim and said “the idea of NBC News taking a threat seriously from a tabloid company about Matt Lauer is especially preposterous, since they already covered him with great regularity.”

The book details "Weinstein's personal interactions with NBC News and MSNBC chairman Andy Lack, NBC News president Noah Oppenheim and MSNBC president Phil Griffin,” according to Guthrie, who notes that the disgraced movie mogul called them frequently enough “that Weinstein's assistants who were asked to place phone calls to the men dubbed them ‘the triumvirate.’”

THR also indicated that claims of sexual misconduct against NBC executives themselves will be included in the book.

After an internal review, NBC declared in 2018 that NBC News management was oblivious to Lauer’s alleged pervy past. The controversial review was conducted by in-house general counsel Kim Harris despite widespread calls for an independent investigation.

“Farrow uncovers seven allegations of workplace sexual misconduct by Lauer that seem to contradict the network's stance that management had no knowledge of his behavior as well as seven nondisclosure agreements — many with hush-money payouts — to accusers of Lauer and others at NBC. Multiple Lauer accusers, including the woman whose complaint to NBC's human resources department resulted in the star's ouster, tell their stories in detail,” Guthrie wrote. "NBC maintains that it had no knowledge of Lauer's behavior before he was fired."

NBC News maintained it had no knowledge of Lauer’s misconduct in a statement to THR.

THR: Publisher Little, Brown has gone to great lengths to keep the book under wraps.

“In an effort to avoid any leaks, the publisher has gone to great lengths to secure the book's contents before publication. The Hollywood Reporter is one of only a handful of outlets allowed an early read, and even that had to be done in a conference room at Little, Brown's Midtown [Manhattan] offices under the gaze of a minder,” Guthrie wrote.

Guthrie indicated that she was eventually given a watermarked copy that she promised not to read in public.

THR: Weinstein allegedly used his friendship with Hillary Clinton, too

Guthrie said Farrow was attempting to interview Clinton for an unrelated project in the summer of 2017, and the former secretary of state’s publicist later informed Weinstein that Farrow was working on a concerning story.

“Then, in September 2017, according to an email cited in the book, Weinstein wrote to Deborah Turness, the ex-president of NBC News who now runs NBC News International, to propose a docuseries on Clinton,” Guthrie wrote.

THR: Farrow says he is banned from NBC with one exception

Farrow appeared on MSNBC’s “The Rachel Maddow Show” in October 2017 following the release of his Weinstein scoop and famously hinted that NBC News passed on the report. "I walked in the door at The New Yorker with an explosive, reportable piece that should have been made public earlier,” he told Maddow.

Guthrie wrote that this segment “set off a firestorm at NBC”

“The moment they were off the air, Maddow's phone rang, and Farrow could hear {MSNBC President Phil] Griffin screaming through the receiver,” Guthrie wrote. “Farrow believes that he is blacklisted from NBC News and MSNBC. Only Maddow has had the clout to flout this ban; she had him on her show in April 2018, to discuss his foreign policy book, ‘War on Peace.’ NBC's executives deny Farrow is banned, but multiple sources tell THR that their attempts to book Farrow have been quashed.”

MSNBC did not immediately respond when asked if Farrow is subject to such a ban.