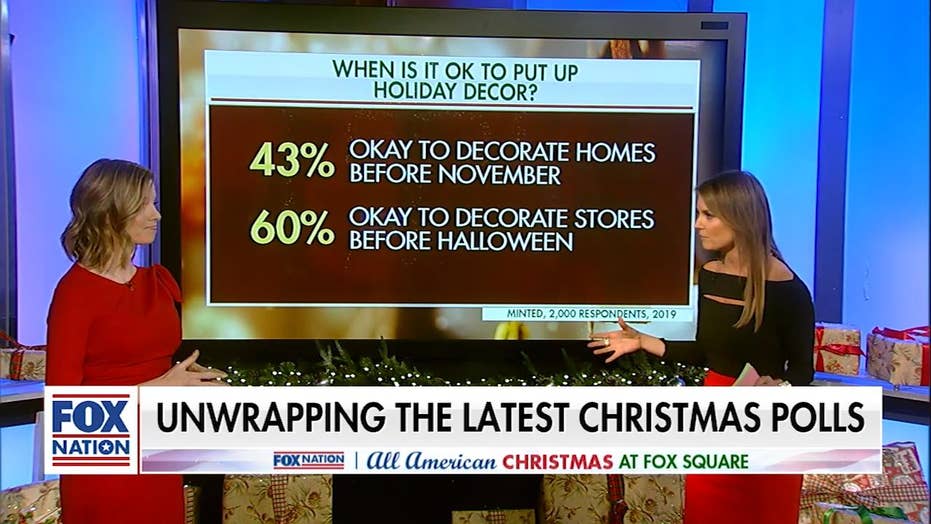 How early is too early for holiday decor: Poll

It's a longstanding debate: when is the appropriate time to whip out the Christmas decorations?

In recent years, many have embraced the Christmas spirit early, decorating for the holiday before Thanksgiving rolls around. While others prefer to wait until early December to deck the halls, the question of appropriate timing remains.

In an attempt to put the hotly debated question to rest, pollster Kristen Soltis Anderson, host of Fox Nation's brand new show  "What Are the Odds?" shared the findings of a recent poll on Fox Nation's Christmas special "All American Christmas on Fox Square."

According to the 2019 Minted poll, 43 percent of respondents prefer to decorate their homes before November, but 60 percent prefer that seasonal decorations are limited to stores during that time.

"This is a debate all the time, an argument amongst neighbors, amongst family members even in your household," "Fox & Friends" co-host Jillian Mele said in the Fox Nation special.

How early is too early for holiday decor: Poll

"I'm one of those people who put up Christmas decorations before Thanksgiving," she added, as her fellow co-hosts booed from the audience.

According to a 2017 study discussed on MarthaStewart.com, embracing the holiday cheer early may actually boost one's happiness heading into the season.

"Decorating your house early extends those magical childhood emotions from times gone by, which can only serve as a constant reminder causing positive psychological changes that affect your mood," Steve McKeown, a psychoanalyst, told Martha Stewart Living.

Many on Twitter had mixed reactions to the November holiday decor debate, some calling it a "crime" while others expressed support for the early lights and wreaths.

"Christmas music and decorations in November should be a crime," one user wrote.

"Forgive for being Orthodox but Christmas decorations should not be up in November," another agreed.

"It’s...November, Christmas film on, decorations going up and I just ate a mince pie.....not even sorry," a Twitter user fired back.

To watch all Fox Nation's Christmas special "All American Christmas on Fox Square" and Soltis Anderson's new show "What are the Odds?" which will focus on political polls heading into 2020 go to Fox Nation and join today.