Three parents whose children were murdered by illegal immigrants joined "Fox & Friends First" Friday to discuss liberal mayors who have pushed back on the open-border policies of the Biden administration as migrants arrive in their cities.

"They ignore us. But then now when it's their families, and they're being infected, all of a sudden now there's the urgency to stop it. He won't even come to the border, he doesn't want to come to the border because he knows it'd be a reality check," said Shaw, whose 17-year-old son was shot and killed in March 2008 by illegal immigrant and gang member in Los Angeles. 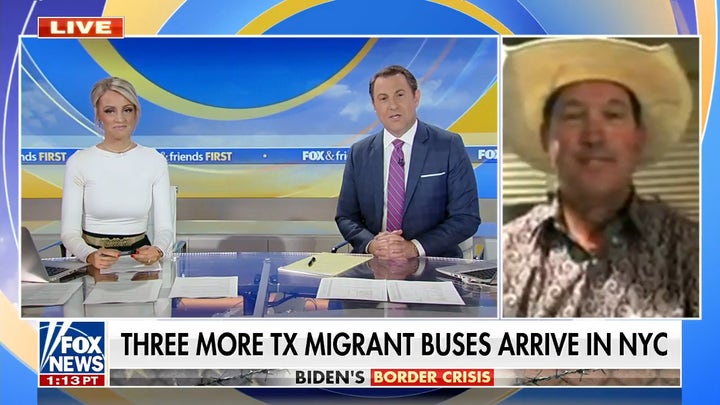 New York City Mayor Eric Adams ramped up pressure this week on the federal government to step up and assist with the surge in migrants the city is seeing -- a week after Washington D.C. Mayor Muriel Bowser made a similar plea.

Adams has been sounding the alarm about a spike in migrants coming to the Big Apple, and specifically blaming Texas Gov. Greg Abbott for bussing migrants to the city.

He said on Tuesday that a little over 4,000 have now gone through the NYC shelter system. While that is a fraction of the hundreds of thousands of migrants that hit border states each month, both he and Bowser have complained that they have been overwhelmed.

Wilkerson called Adams a "crybaby" and said that Abbott needs to continue busing migrants to give Democratic officials a taste of what Texans have dealt with. Wilkerson's 18-year-old son was murdered by an illegal immigrant classmate in 2010 in a Houston suburb.

"Let something happen to one of their kids and see exactly what we feel like as parents who have lost our kids. He is laughable. What a crybaby," she said, adding migrants should be sent to wealthy neighborhoods.

Mendoza said this move brings "light to the dire situation at the border," and how this has been ignored by legislators for years.

"They don't heed the Border Patrol warnings that over 1,000 people are killed a week by fentanyl and criminal illegal criminals in our country. And isn't it sad that 250 illegals showing up on a bus delivered by Governor Abbott now has their attention? This is sickening," she told Griff Jenkins.

Mendoza is the mother of Brandon Mendoza, a Mesa, Ariz., police sergeant who was killed in 2014 in a head-on collision with a drunk driver who was in the country illegally.