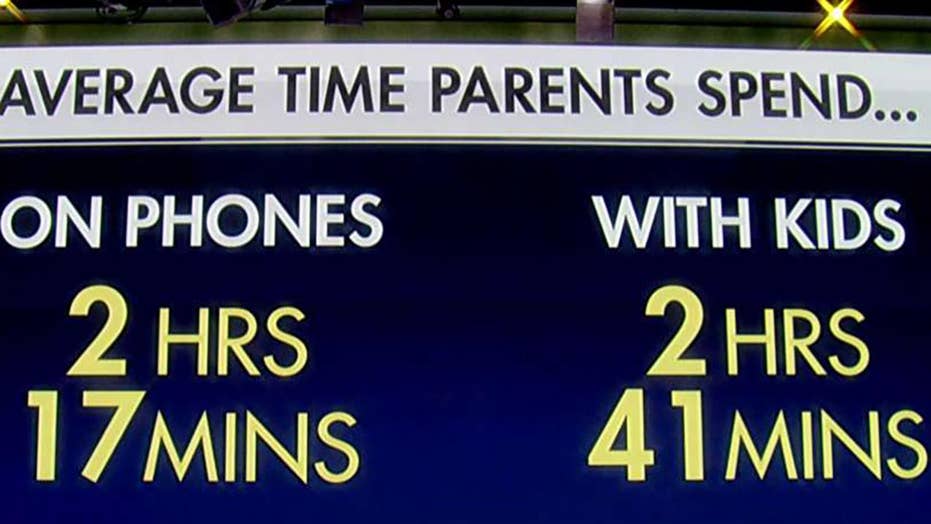 Should parents start making screen time rules for themselves?

69 percent of parents say the feel 'addicted to their phones'; reaction from child and adolescent family therapist Darby Fox.

As parents report spending increased amounts of time on their cell phones, a family therapist warned Tuesday of the potential negative impacts on children.

According to a recent Onepoll survey, the average time parents spend on their phones per day is almost equivalent to the amount of time they spend with their kids. The same survey found that half of the 2,000 respondents have been asked by their children to put their phones away.

Parents are aware that their screen time is a problem, as 62 percent of those surveyed admitted to spending too much time on their cell phones while with their kids. That said, 69 percent of parents also said they feel "addicted" to their phones.

The survey of 2,000 parents found that on average, they spend two hours and 17 minutes per day on their phones, only 24 minutes less than the average amount of time spent with their children.

Appearing on "Fox & Friends First" with anchor Carley Shimkus, child and adolescent family therapist Darby Fox said that phones can make it harder to pay attention to a child's needs.

As an example, Fox said if a parent takes their child to a playground, they would normally be playing them with, pushing them on a swing or "engaging on some way."

"But if you've got the phone, now you're kind of letting them do their thing and you're just standing there. It's just like you're a body," she said.

Fox said children will notice as the years go on and could mimic the behavior with a mobile device of their own.

"The first thing they'll say, especially as they get closer to adolescence, is: 'You do it. Why can't I do it?'" Fox told Shimkus. "And, that's pretty much the same with any parenting thing. It's more about what you do than what you say. So, that's a dangerous precedent."

Is there a solution?

Fox advises parents to be "a little more mindful of it" and "think about certain times of the day that you could always kind of have that rule that you're not going to be on your phone."