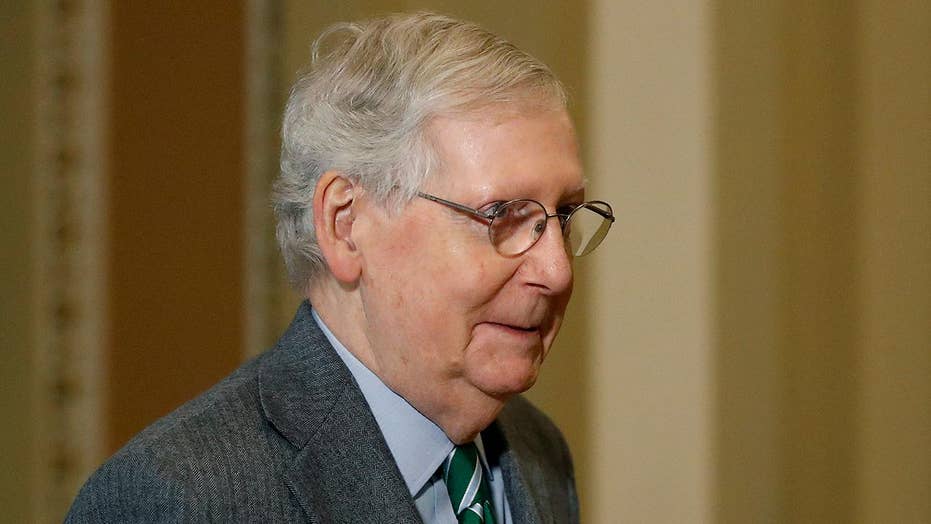 Lawmakers brace for heated debate over the format of the trial; chief congressional correspondent Mike Emanuel reports from Capitol Hill.

Everyone knew it would be a long day when Chuck Schumer held a morning presser to object to Mitch McConnell’s rules.

And that’s precisely how the President Trump’s impeachment trial started off a couple of hours later.

These are questions that have been debated in some form for many weeks in the court of public opinion. Now it’s before a legislative body acting as a court.

In short, the Senate trial began Tuesday with elaborate arguments over process. Now process is crucial in this context, in many ways the whole ballgame. But rather than focusing on whether Trump violated his oath of office by pressuring Ukraine to investigate a political rival, the lawmakers spent much of their time debating procedures—and Republicans gave a little ground.

Many Democrats used the televised forum to repeat their accusations about Trump, Ukraine and obstruction—charges that those who have been paying attention can practically recite from memory.

With the president in Davos talking about the world economy, McConnell took the floor to respond to the Schumer news conference, in which the minority leader said “a trial with no evidence is not a trial at all—it’s a coverup.” The majority leader said his rules were “straightforward” and that pursuing witnesses could indefinitely delay the trial. Then Schumer took the floor to respond to McConnell’s response.

And the outraged speechifying began.

White House counsel Pat Cippolone was relatively brief in his opening statement, saying “there is absolutely no case” against Trump.

But Adam Schiff delivered a stemwinder for the Democrats, complete with graphics and video. The House manager said Trump tried to cheat in the election and that under the president’s approach, he “cannot be indicted, cannot be impeached. It makes him a monarch.”

Another Trump lawyer, Jay Sekulow, said the articles contained “a vague allegation about a non-crime…Why are we here? Are we here because of a phone call?” Cippollone called the charges “ridiculous” and “dangerous to our republic…A partisan impeachment is like stealing an election.”

A series of Schumer amendments were defeated over the course of the day; the GOP had the votes.

Yet McConnell did back off, under pressure from Susan Collins and other Republicans, by allowing evidence to be automatically entered into the official record, which he had tried to bar. And after insisting that each side use its 24 hours of debating time within two days, he lengthened that to three—making it less likely that the sessions would stretch into the wee hours when most of the country is asleep.

For what it’s worth, 69 percent of those in a new CNN poll say the Senate trial should call witnesses, including a 48-44 plurality among Republicans. But McConnell didn’t budge on that point for now.

The day was spent voting on a series of Schumer amendments. In the first pair of tests, Republicans beat back Schumer’s bid to subpoena White House emails and other documents and State Department documents. Both votes -- 53-47 -- were, as expected, along party lines.

There was, of course, a certain predictability to the trial’s first day, just as both sides fully expect Trump to be acquitted. I seriously doubt if the lawyers and lawmakers thought they were changing a single mind in the chamber.

And yet, as they spoke under the watchful eye of Chief Justice John Roberts, there was a sense of the gravity of the moment. This was not another cable-news debate; this was the trial of the president. And in some ways the senators are playing to a broader audience, and to the verdict of history.