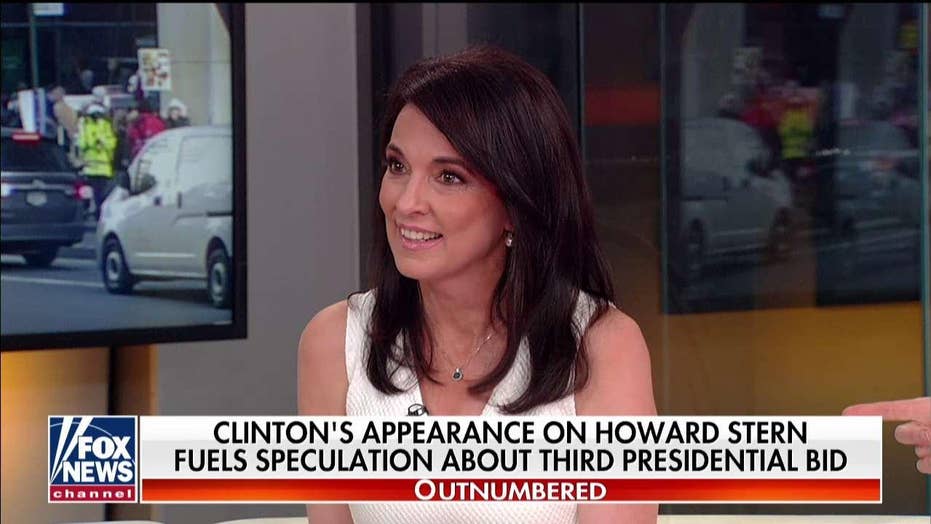 'Outnumbered' takes on Hillary's potential 2020 run: 'No Democrat' wants this

The "Outnumbered" panel weighed in Thursday on the possibility that Hillary Clinton will make a third bid for the presidency after the 2016 Democratic nominee appeared on Howard Stern's radio show and discussed a potential late entrance in the 2020 race.

“This helps nobody in the Democratic Party,” Iona College political science professor Jeanne Zaino said. “The only people benefiting if she runs is Donald Trump, the Republicans, and the media who would have a field day."

“There is no Democrat who wants her to do this again," Zaino added. "Twice she ran, twice she lost, and for them to go back to something like this, you could see their [Democrats'] heads explode.

Clinton made her first-ever appearance on Stern's satellite radio show Wednesday, making headlines on everything from her sexual preferences to how she felt during President Trump’s inauguration.

The former secretary of state told Stern that watching her political nemesis get sworn into office was painful but she felt an obligation to attend as a former first lady.

“She's always been calculating, strategic, trying to figure out how she can position herself as the savior of the Democratic Party so I think this is absolutely her way of trying to maintain relevancy,” said former Deputy Assistant Attorney General Tom Dupree.

While Clinton, 72, has downplayed chances of a 2020 run, she has completely not ruled it out in recent interviews. New York Post columnist Maureen Callahan argued that Clinton’s appearance on Stern's show was the “strongest indicator yet“ that the former first lady is looking for a 2020 rematch with Trump

Co-host Dagen McDowell speculated that Clinton won’t run again because of questions about her husband Bill's relationship with late convicted pedophile Jeffrey Epstein. Co-host Lisa Kennedy Montgomery agreed, claiming that the former president would be much more of a liability in the 2020 presidential election than in 2016.

"You know, that can take down the monarchy," said Kennedy, referring to the ongoing controversy surrounding Prince Andrew's ties to Epstein. "It certainly isn’t going to support a presidency.”