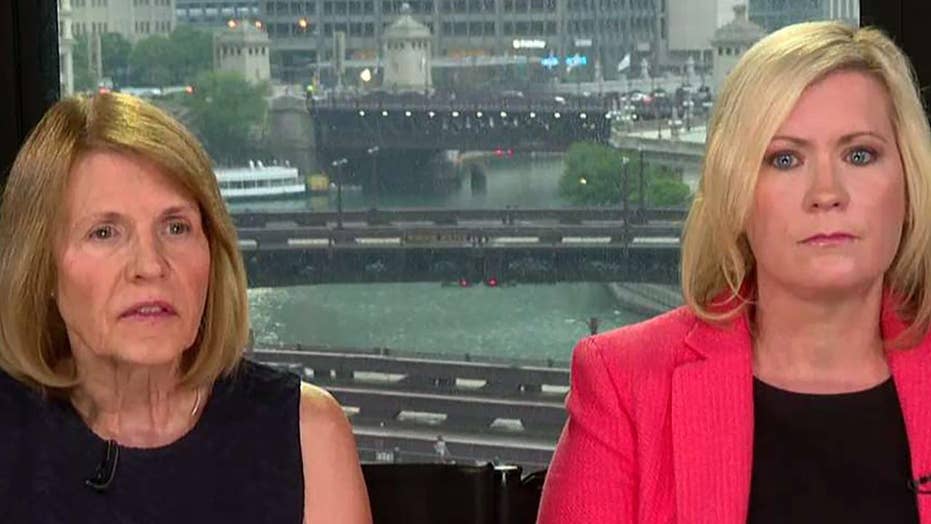 Two aides at an Illinois nursing home have been fired, arrested and are being sued after video allegedly shows them taunting a 91-year-old dementia patient. The family speaks out on 'Fox &amp; Friends.'

A family has filed a lawsuit against an Illinois nursing home where staffers are accused of taunting their mother, who suffers from dementia.

“We’re bringing the lawsuit to create awareness that this kind of thing goes on,” Black said.

Two staff members were fired and arrested after video footage allegedly showed them taunting Collins by waving a hospital gown in her face.

The workers, arrested on misdemeanor charges, were identified as Brayan Cortez and Jamie Montesa. They were caretakers at the Abington of Glenview nursing home, about 24 miles north of Chicago.

“Imagine what was happening when the cameras were off if this is what they’re broadcasting,” Black said.

Collins' daughter, Joan Biebel, said the family was alerted to the video clip by a former employee of the nursing home, who was "broken-hearted" because she had cared for Collins in the past.

According to reports, Snapchat video footage recorded last December – four days before Christmas -- showed Cortez waving a hospital gown at the elderly woman, knowing that the sight of the gown was a source of fear and anxiety for her. Montesa allegedly held the camera.

Cortez told police the taunting of the patient was considered an “ongoing inside joke,” the station reported.

"When I saw it, it was total disbelief. ... You're disgusted, you're almost in a panic, what do you do next to protect her at a nursing home where she thought she was absolutely safe?" said Biebel.

The two former nursing assistants are due in court later this month, while Collins has reportedly been moved to a different facility.

Black said the alleged abuse occurred despite the fact that the family has been "vigilant" when it came to Collins' care and visited often.

"So you have to wonder about those folks who don't have advocates and family members," said Black, urging nursing home staff members to immediately report abusive behavior if they witness it.

In a statement, the nursing home said, "the privacy and dignity of our residents are of the utmost concern" and noted that the two workers were immediately fired when administrators learned of the video.