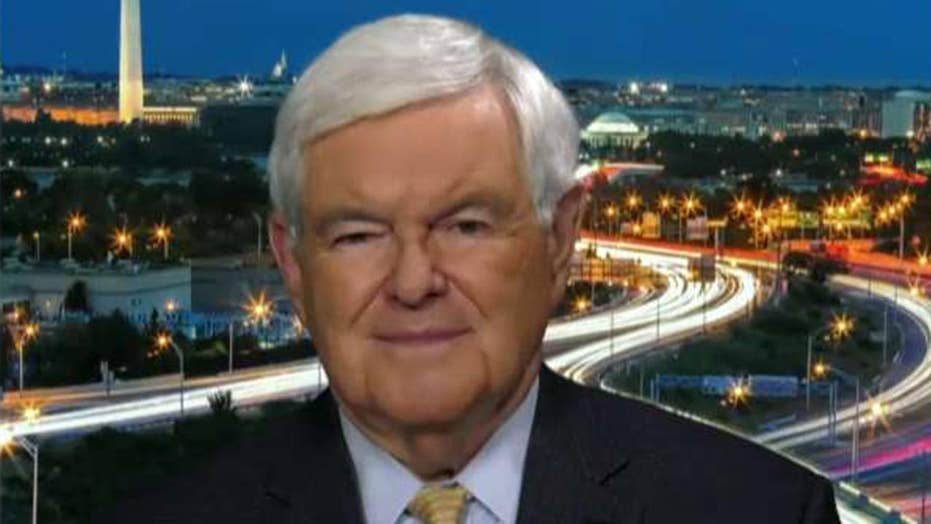 "They have an absolute deep, passionate need ... I would argue a pathological need, to try to destroy the president, even if in the process they cripple themselves," Gingrich said on "Hannity." "This is a drama in which Schiff and Pelosi and others are living out their fantasies largely out of desperation, because I think deep down, they think Trump is going to get reelected."

Gingrich also claimed Democrats do not care about "facts" or "arguments," added that the whole proceedings weren't "real."

"They're just faced with a nightmare. And so none of this stuff is real. People shouldn't judge it as real," Gingrich said. "It's a theater and it's a theater of hate [for] Trump led by Schiff and Pelosi."

The House Intelligence Committee will hold the first of five hearings Tuesday morning. Eight witnesses -- including several who have provided inconsistent accounts of key events -- are set to testify over three days in what could be a make-or-break week in House Democrats' impeachment investigation.

To add to the drama, President Trump tweeted Monday he would “strongly consider” testifying or providing written answers to questions after Pelosi challenged him to testify before Congress if he wants to set the record straight.

On Monday, Gingrich argued the inquiry would ultimately affect the American news media the most.

"I think the biggest impact, ironically, may be the destruction of the American news media," Gingrich said. "Over 50 percent of the country now sees the news media as deliberately anti-Trump, having no interest in the facts, not covering the news, [and] serving as propaganda."