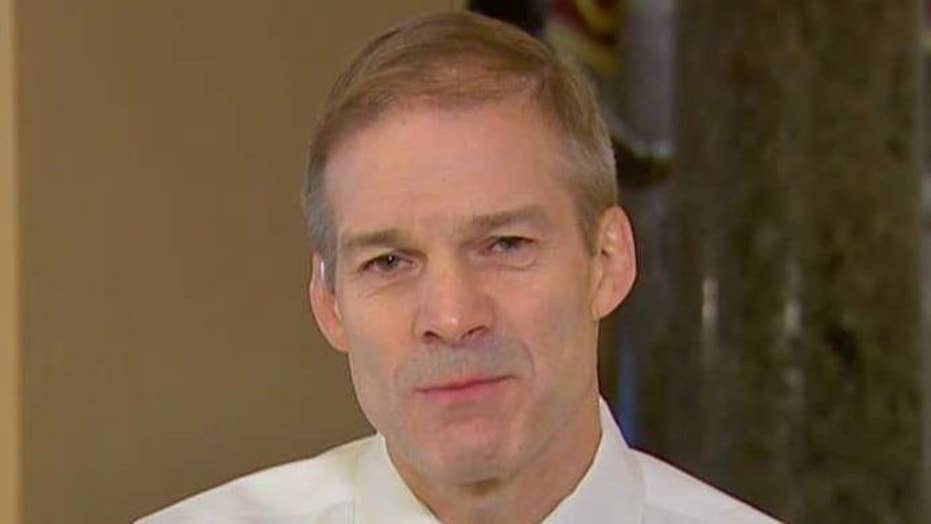 Republican Rep. Jim Jordan says the American people are seeing the 'facts are on the president's side' after day one of the public impeachment hearings with Amb. William Taylor and George Kent.

NBC News employees piled on one of their own colleagues over his report about how the first public impeachment hearing lacked "pizzazz."

U.S. diplomat Bill Taylor and State Department official George Kent were the first witnesses to offer their testimony in the open and were grilled for several hours over their knowledge of President Trump's conduct with Ukraine.

NBC News political reporter Jonathan Allen noted in an analysis, however, that the hearing was "substantive, but it wasn't dramatic."

"The first two witnesses called Wednesday testified to Trump's scheme, but lacked the pizazz necessary to capture public attention," Allen wrote. "At a time when Democrats are simultaneously eager to influence public opinion in favor of ousting the president and quietly apprehensive that their hearings could stall or backfire, the first round felt more like the dress rehearsal for a serious one-act play than the opening night of a hit Broadway musical."

When the report was shared on social media, the "pizzazz" headline triggered critics, including by some of Allen's co-workers.

"This is an embarrassing and unserious headline. Do better," MSNBC contributor Jennifer Rubin reacted.

"Not sure that 'pizzazz' was the point," MSNBC contributor Charlie Sykes also swiped.

MSNBC analyst Ben Rhodes hit Allen after he had defended his reporting and stressed how the "presentation aspect" of the impeachment hearings was important to Democrats trying to sway public opinion on impeachment.

"Maybe it’s more important for the American people to learn the facts than to have an analysis of pizazz," Rhodes told Allen. "That’s the purpose of public hearings and we’d be a lot better off if it was the basis for our politics."

"You know who was the most boring witness I ever saw? Alexander Butterfield. And he brought down the Nixon presidency," Ronald Klain tweeted. "I'm sorry that saving our democracy doesn't have enough "pizzazz" for you...."

"Analysis: Nuremberg Trials lay out disturbing details, but lack pizzazz necessary to capture public attention. Unlike the Blitz, which, like, totally persuaded people to get out of bed and pay attention to the nightly news. -@jonallendc, Nov 20th, 1945, probably," Mystal wrote.

Allen shot back, "Here's a sick thing to write to a Jew."

NBC News did not immediately respond to Fox News' request for comment.

Reuters faced similar backlash for its own report that declared, "Consequential, but dull: Trump impeachment hearings begin without a bang."