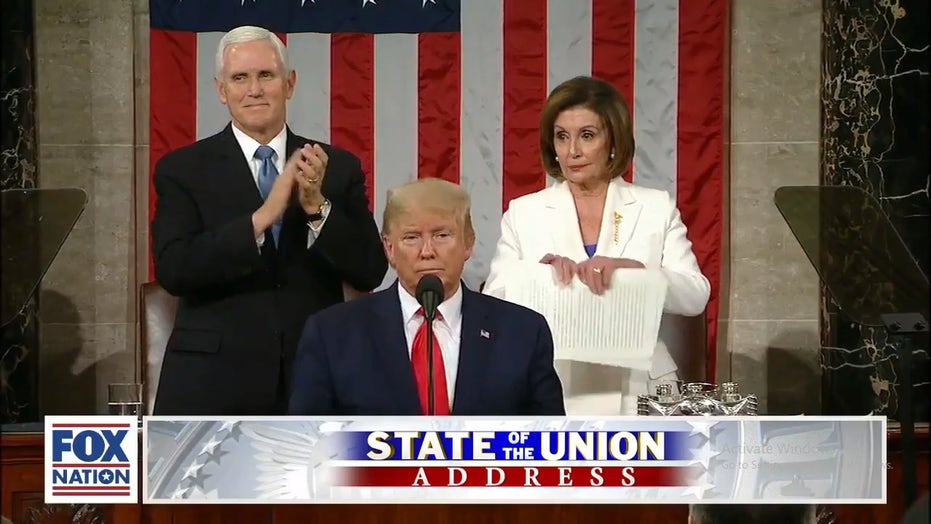 "Oh wow! That was her power move?" said Fox Nation host Tomi Lahren, as she watched in realtime as House Speaker Nancy Pelosi stood up at the conclusion of President Donald Trump's State of the Union speech and tore a copy of it into pieces.

"She ripped the speech in half," said Fox News contributor and the host of 'Reality Check,' David Webb.

"We're reacting live to what looks like Nancy Pelosi ripping Trump's speech in half because apparently the great American comeback, low unemployment, military dad's arriving and advancements made in technology and health care and science is worth ripping," said Lahren on Fox Nation's live coverage of President Trump's 2020 State of the Union.

In a nearly immediate response, the official White House Twitter account appeared to blast Pelosi and referenced several of the guests of honor whom Trump had introduced during the State of the Union address.

"Speaker Pelosi just ripped up: One of our last surviving Tuskegee Airmen. The survival of a child born at 21 weeks. The mourning families of Rocky Jones and Kayla Mueller. A service member's reunion with his family," the White House said in the tweet. "That's her legacy."

Among the guests at the address were the family members of a man killed by an illegal immigrant and an aid worker killed by ISIS leader Abu Bakr al-Baghdadi.

"Look, if Obama gave his speech -- you don't do that," added Webb. "You're the speaker of the House and you rip the State of the Union speech in half? It's petty. It's childish. They talk about decorum in the House -- this is beneath the House." 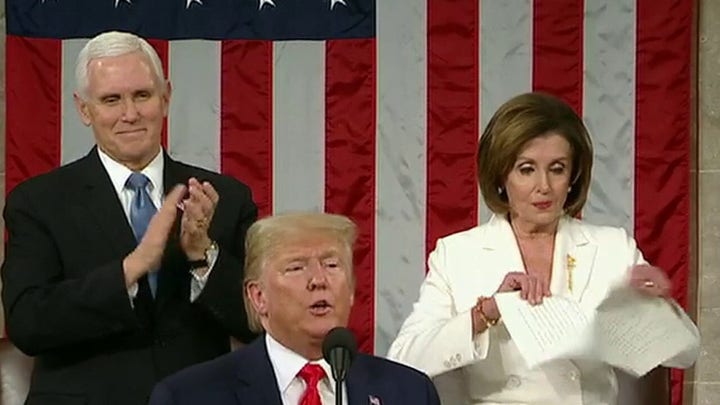 "They always talk about how a president should be presidential," said attorney and political analyst Erin Elmore.

"They're always on the moral high ground, taking the high road and they always say that President Trump isn't presidential -- well look at their behavior right here," she continued, observing that Pelosi also seemed to be shuffling papers for the majority of the time during the President's remarks.

"I don't think that we should let any of this overcome -- I think the president killed it tonight," cautioned Wall Street Journal Editorial Board member Bill McGurn.  "He did exactly what he had to. That speech was forward-looking, positive and presidential."

"If you looked at the reaction of the Republicans, he didn't just please them, he inspired them," McGurn concluded. "There was a lot of raucous cheers for life, for the soldiers, for the Second Amendment. There was a lot there."

To watch all of President Trump's 2020 State of the Union address and the panel's commentary go to Fox Nation and sign up today.