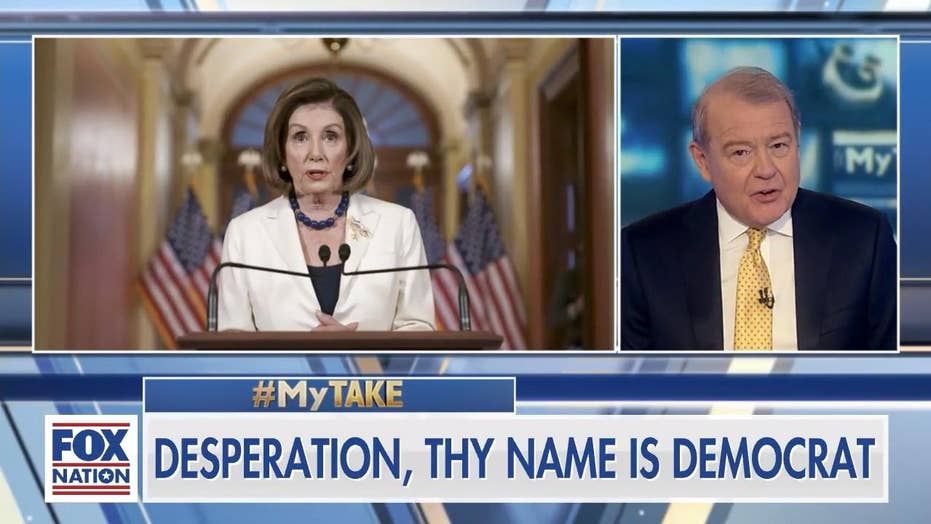 Varney: 'Desperation, thy name is Democrat'

"Strangely, it's the Democrats who appear rattled by impeachment... you'd think the Republicans would be unnerved, but in fact, it's the other way round," Varney said on Fox Nation's "My Take" on Friday.

Varney pointed to House Speaker Nancy Pelosi's reaction to a reporter's question at her Thursday news conference, during which she announced that she had directed House committees to move forward with writing articles of impeachment for Trump.

A Sinclar TV journalist asked the speaker how she would respond to Republican allegations that she is seeking to remove the president from office because of personal animosity toward him.

"I don't hate anybody," she shot back, pointing at the journalist. "I pray for the president all the time. So, don't mess with me when it comes to words like that."

Another group of Democrats who have reason to fear impeachment are moderate Democrats, according to Varney.

"You can bet those moderate House Democrats are indeed rattled. The speaker has put impeachment in front of the USMCA, which would have helped all of us," said Varney, referencing the U.S.-Mexico-Canada Trade Agreement, which is still awaiting final approval in the House.

Varney took further aim at the speaker over her remarks at a CNN town hall on Thursday, during which she said that "civilization itself is at stake."

"The impeachment vote may be held on December 22nd," Varney said.

"That is the first night of Hanukkah and two days before Christmas Eve... got to save that civilization," he joked.

Speaker of the House Nancy Pelosi, D-Calif., responds forcefully to a question from a reporter who asked if she hated President Trump, after announcing earlier that the House is moving forward to draft articles of impeachment against Trump, at the Capitol in Washington, Thursday, Dec. 5, 2019. (AP Photo/J. Scott Applewhite)

Then Varney questioned former Vice President Joe Biden's confrontation with a voter in Iowa, during which Biden raised his voice and called the man a "damn liar" over claims that he had encouraged his son to take a job with a Ukrainian company and sell access to the White House.

"He walked right up to him -- getting real in front of the guy, maybe he just wanted to look tough," suggested Varney.

"The left is unhinged.  And for sheer, over-the-top nonsense -- how about this from The Washington Post," said Varney. "First Lady Melania Trump is sending coded messages with the clothes she wears. Before that The Post fashion editor said Melania's coat in a Christmas special was ridiculous and she'd worn the shoes before."

"It's almost funny, but it's not," he concluded. "It's a demonstration of the emotion that has fired the Trump haters for the last three years. Just wait till he wins another term."