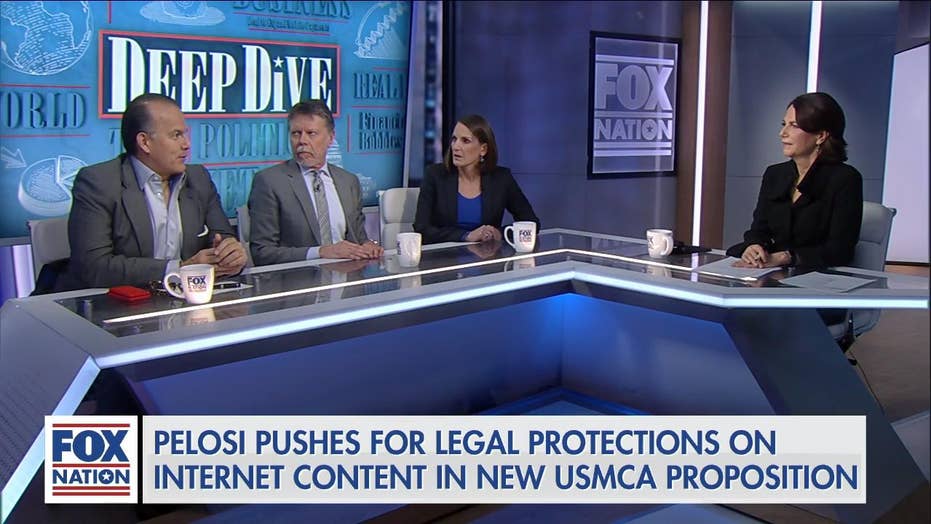 "It's clear that there probably are the votes in the House between the Republicans and the Democrats" to pass the U.S.-Mexico-Canada trade agreement (USMCA), a senior research fellow at the Mercatus Center at George Mason University said Fox Nation's "Deep Dive" on Thursday.

"The question is, what is Nancy Pelosi going to decide?" Veronique de Rugy asked on the "Dive" panel.

The USMCA is the proposed deal that President Trump hammered out with his counterparts in Mexico and Canada in October of 2018 to replace the existing trade agreement, NAFTA.  At the moment, the USMCA awaits final approval by Congress and the other signatory countries.

On Thursday, the White House accused House Speaker Pelosi of ignoring the will of the American people by announcing a vote on impeachment rather than the U.S.-Mexico-Canada trade agreement during her 20-minute weekly press conference on Thursday. She did not mention the USMCA at all.

"What her goal is is to put a Democrat in the White House in 2021," de Rugy said. "And it's going to depend on whether she can turn the passage of USMCA as a victory for the Democrats, or whether really it is more important to not give a victory to the president."

"These are not the same Democrats that passed NAFTA," added Jorge Suarez-Velez, the founding partner of SP capital, which advises small companies, focusing on Latin America. "This is a party that has moved more towards protectionism. If you look at the creed of Elizabeth Warren, in terms of trade, I mean, she doesn't want to trade with anyone."

De Rugy agreed with Suarez-Velez, though both acknowledged that President Trump has also expressed skepticism towards traditional trade agreements.

Suarez-Velez also raised concern that should the Congress fail to approve the USMCA, the U.S. may find itself in a precarious position in the face of a potential further escalation in the ongoing trade dispute with China.

"I think what is being neglected by this short-term political gaming is you will have a big trade war with China. And I'm positive all that. I think it's not going to happen before the election because Trump understands that that would hurt the economy," predicted Suarez-Velez. "The big question that Americans should be asking themselves is, are we better prepared for that war keeping a very solid supply chain because of having three integrated countries or it would be better for the U.S. to be on their own?

"I think it's, without a doubt, the three countries are stronger," he concluded.