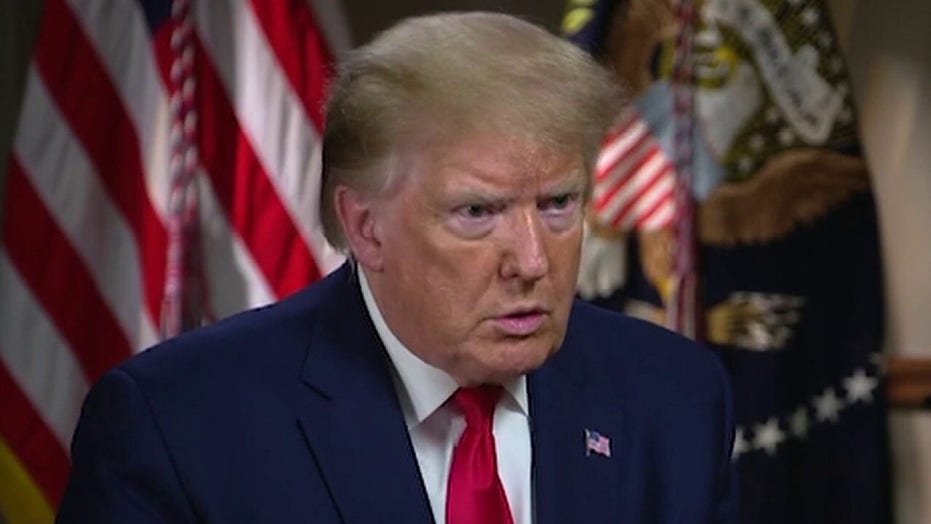 President Donald Trump explains what a 'law and order president' means during an exclusive interview with Harris Faulkner.

An MSNBC producer was blasted for taking President Trump's remarks about chokeholds out of context.

During his sitdown with "Outnumbered: Overtime" anchor Harris Faulkner, Trump was asked about how he views police reform and specifically chokeholds, which could be banned following the death of George Floyd.

"I don't like chokeholds," Trump began. "And I will say this ... sometimes when you're alone and you're fighting somebody, it's tough. And you get somebody in a chokehold, what are you gonna do, say 'Oh,' and it's a real bad person and you know that and they do exist. ... If you have two people or in the case, we're talking about four people ... it's a very, very tricky situation."

He later continued, "I think the concept of chokeholds sounds so innocent, so perfect, and then you realize -- if it's a one-on-one -- now if it's a two-on-one, it's a little bit of a different story depending on the toughness or strength ... but if a police officer is in a bad scuffle and he's got somebody on a chokehold --"

"Well, if it's a one-on-one fight for the life, that's what you're saying," Faulkner clarified.

"Yeah," Trump responded. "So you have to be careful. With that being said, it would be, I think, a very good thing that, generally speaking, it should be ended."

However, "The Last Word" senior producer Kyle Griffin took only sentence from that exchange that appeared that Trump was in favor of chokeholds despite him clearly stating they widely "should be ended."

"Trump on Fox: 'I think the concept of chokehold sounds so innocent, so perfect,'" Griffin tweeted.

That tweet was shared by several journalists and even members of the Biden campaign.

Griffin, who has a reputation for sharing misleading tweets about Trump, was slammed for spreading misinformation with critics comparing his tweet to the full remark.

"Why quote the president fully when you can just take a snippet and spin it to make it look like he’s endorsing these police chokeholds for RTs and likes," Washington Examiner's Siraj Hashmi reacted, adding Griffin to his iconic daily list of Twitter wrongdoers.

"@kylegriffin1 should not be a reporter, he is not remotely interested in getting the truth to the American people, he is a political hack willing to lie & further inflame racial tension in this country if it helps the left," Reagan Batallion scolded the MSNBC producer.

"There is never any consequence for this sort of thing, so why stop?" National Review senior writer David Harsanyi asked.