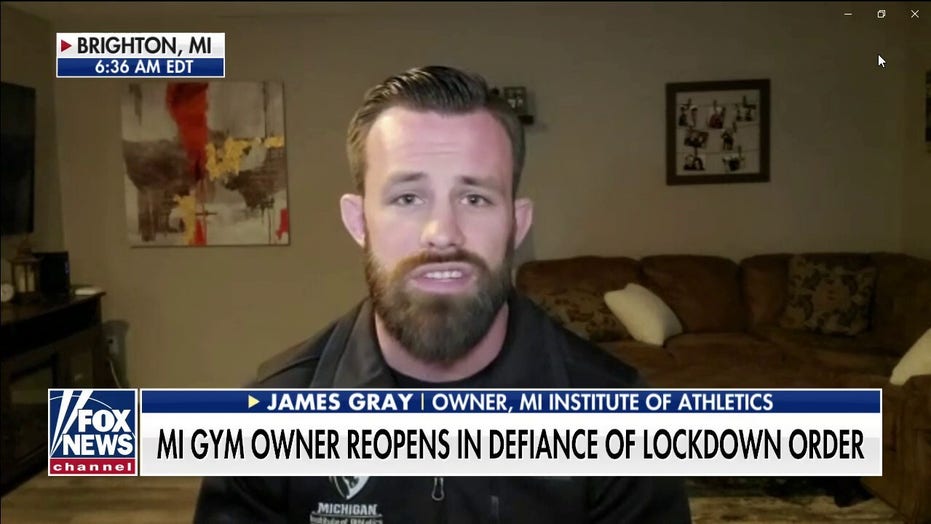 A Michigan gym owner who defied Democratic Gov. Gretchen Whitmer's COVID-19 executive mandates explained why he protested with the Open the States movement on Friday.

Appearing on "Fox & Friends Weekend" with host Pete Hegseth, Michigan Institute of Athletics owner James Gray said Saturday that he had reached out to other business owners, local elected officials, ICU nurses and doctors, and House of Representatives members to help compile a large resource of information to get Open the States off the ground.

"I mean, our life's work, our dreams, everything that we’ve put together is on the line at this time," he asserted.

"And, you know the governor just indefinitely keeps extending these orders without even informing the people. Some of the officials [who] I spoke to were even telling me that the governor has been saying to the legislation that she has information that they do not have which is why she is making these extensions," stated Gray. "And, when we’re not even working with our own elected officials in a time that shouldn't be partisan at all, a time where the entire nation is in a struggle together, we need people to come together."

On Friday, supporters of Open The States spread messages via social media in a virtual protest. A Stand Up Michigan rally for other business owners was also held.

Michigan Gov. Gretchen Whitmer addresses the state during a speech in Lansing, Mich. Some Republican state lawmakers have filed a legal challenge to compel her to reopen the state’s economy amid the coronavirus pandemic. (Michigan Office of the Governor via AP)

"We’re basically saying: it's time. We have the information in front of us. We are able to make difficult decisions," he added.

Whitmer has extended her "Safer at Home" order until June 12. She also extended her state of emergency through June 19, WJBK-TV reported.

In a statement, Whitmer said that while cases and deaths are declining in her state, "we are not out of the woods yet."

"You know, fear has crippled a lot of people in this event. And, you have a lot of people [who are] afraid to make the wrong decision," Gray told Hegseth. "But, it's times like [this] throughout history when you bring people together and you make those decisions that you enact change."

"I mean, it's just like I said: we want to encourage people to stand up. We want to bring them together. We want to get them educated. Because...how we can fight this battle and win [is with information]," he concluded. "So let's stand up across the nation. It's going to be a national event. We want people to, you know, get on board and let's get this country back to work."

Thus far almost 39 million Americans have lost their jobs in the economic crisis. According to Johns Hopkins University of Medicine, more than 96,000 Americans have perished due to the contagion.