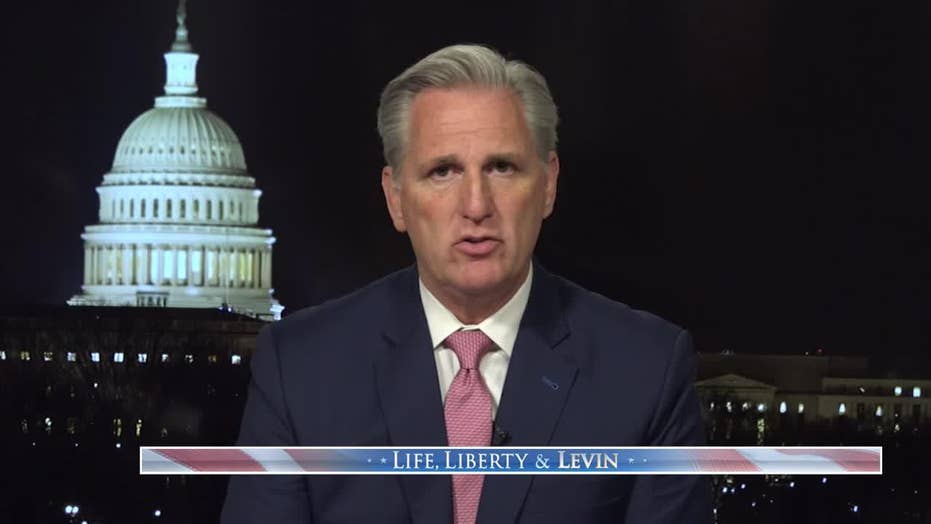 House Minority Leader Kevin McCarthy, R-Calif., told "Life, Liberty & Levin" Sunday that he believes Speaker Nancy Pelosi's refusal to reconvene the House of Representatives has more to do with ramming through partisan legislation than keeping lawmakers safe from coronavirus.

"Right now we're in the middle of a crisis. And if you look at this [congressional] campus here, you go two blocks away, you can get a Starbucks," McCarthy told host Mark Levin. "You can go to the Senate side. They're meeting. The only place that is not working right now is the House.

"This isn't about reopening a campus," said McCarthy, who noted that Congress stayed in session even as some of the Civil War's fiercest battles were fought nearby. "This is about restoring the voice of America during this critical time."

The Republican leader added that under the current arrangement, Pelosi, D-Calif., can effectively "write bills in her office" with only the input of her staff and leadership team, skip the committee process that customarily precedes any full House vote -- and then simply reconvene the House at a future time for an immediate vote on the legislation.

"If we are not meeting, you don't have input. You don't have the American voice coming through," he said. "So it empowers the speaker even greater ... She can write a one-or-two-trillion-dollar bill with no input, no accountability, and then call everybody back in a crisis time [and give] only the opportunity to vote up or down."

McCarthy also claimed Pelosi is interested in inaugurating votes by proxy, "so she could have 200 votes in her pocket, write a bill, no one gets a say, and then just pass it by herself."

"Our founders would be ashamed," McCarthy said. "What she is doing is directly against the founders. Article I, IV, V or VI, because the more she keeps us away, she can stay in San Francisco near her freezer, [and] write the bill. And now the idea, to take a proxy vote? ... [Voters] cannot hold accountable somebody who passes that vote on to somebody else."