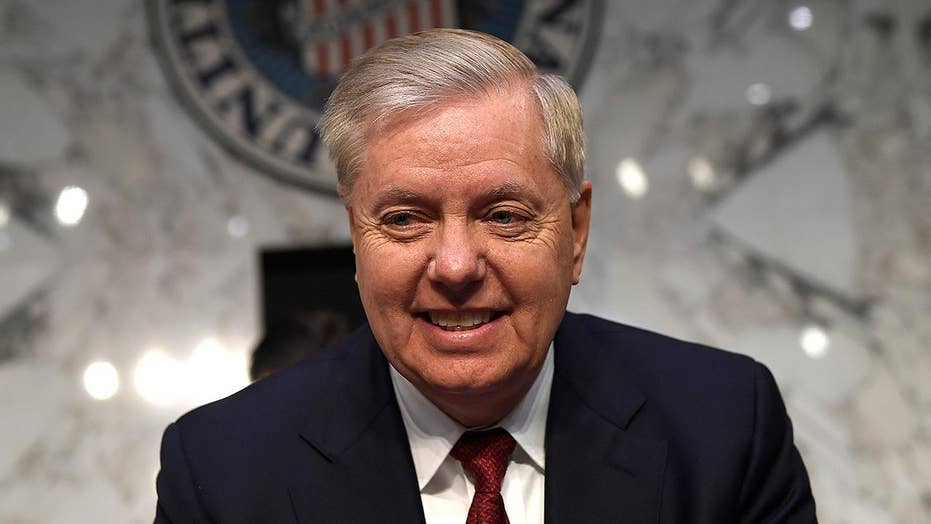 Graham: Goal of Senate impeachment trial is to 'end this as soon as possible'

Sen. Lindsey Graham says an impeachment trial in the Senate will have no witnesses in an effort to end the 'sham' investigation and danger to the presidency as soon as possible.

Appearing on "America's Newsroom" with hosts Bill Hemmer and Sandra Smith, Graham said he'd like to end the impeachment process "as soon as possible."

"I don't want to give it any legitimacy because it's a crock," he said, noting that "every impeachment except this one has been conducted by outside counsel."

IMPEACHMENT MARKUP HEATS UP AS DEMS INVOKE MLK, NADLER SAYS 'WE CANNOT RELY ON AN ELECTION' TO OUST TRUMP

On Thursday, the Judiciary Committee began day two of its impeachment markup and, after members debate and vote on proposed amendments to the articles, is expected to send them to the House floor for a debate and vote next week.

To convict the president and remove him from office two-thirds of the Senate's vote is required.

"This is being driven by Democratic partisans, it's being rushed, there's no due process ... Abuse of power, if you're looking for it, my Democratic House colleagues, look in the mirror," Graham stated.

"I hope that we'll look at the record they use to impeach the president. If they get 218 votes, that will be the trial record. Let the House manager present their case. Let the president's lawyer comment on the House case. Then vote," he told Hemmer.

"My goal is to end this as soon as possible for the good of the country because I think it's a danger to the presidency to legitimize this," Graham stated.

"Does that mean no witnesses at all?" Hemmer asked.

"I don't need any witnesses at all. I am ready to go," Graham replied, adding that the issue of Hunter Biden's work in Ukraine can be addressed outside of impeachment hearings.

"It's closer to a week, for sure," the South Carolina senator said.

"The trial records should be the documents that they use for impeachment in the House: no more, no less. I'm not interested in any witnesses. This thing is a sham," he concluded. "I want to get it over with."

Fox News' Gregg Re, Brooke Singman, and Ronn Blitzer contributed to this report.