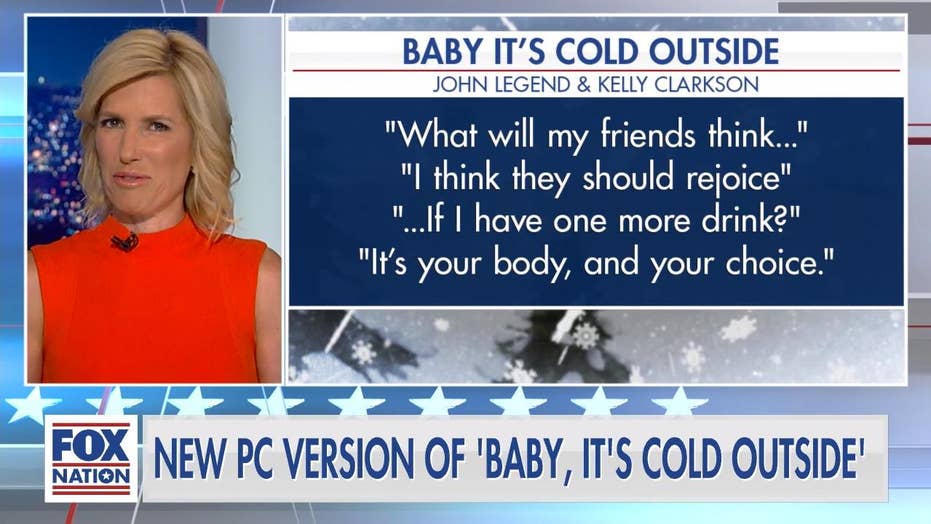 Fox News host Laura Ingraham slammed "PC culture" on her Fox Nation show "Laura and Raymond" after musicians John Legend and Kelly Clarkson announced their collaboration to rewrite the Christmas classic "Baby, It's Cold Outside," with hopes of changing the message in light of the #MeToo era.

"I think it is horribly unfair to new generations of Americans to deny them the...opportunity to hear and take in a bygone time," said Ingraham.

'BABY, IT'S COLD OUTSIDE' CHRISTMAS SONG CONTROVERSY ISN'T NEW: A BRIEF HISTORY OF THE LYRICS DEBATE

The song, originally written by Frank Loesser in 1944, is an American favorite, which features the duet between a man and a woman as he tries to convince her to stay overnight at his home on a cold winter’s night.

In recent years, advocates of the #MeToo movement have coined the song "sexist," some suggesting a "date rape" implication.

As the holiday season approaches, Legend announced his re-write plans, which will shift the original message to focus more on consent for a new generation with a “newfound sensitivity," according to a Vanity Fair interview.

My mother will start to worry (Beautiful, what’s your hurry)

The neighbors might think (Baby it's bad out there)

Say what's in this drink? (No cabs to be had out there)

What will my friends think (I think they should rejoice)

If I have one more drink? (It’s your body and your choice)

"Laura and Raymond" co-host Raymond Arroyo had strong words of his own on the new version, calling the lyrics "lousy, clunky and out of meter."

"Not only do the rewrites totally cut against the character’s intentions and the whole thrust of the song, but they’re also clunky and out of meter," he wrote in a recent Fox News op-ed.

"You can't go back and remake something you don't like from the past...cast it aside if you don't like it, but you're not allowed to mar it," Arroyo said on the Fox Nation show.

"I just keep saying, '"If my mother were alive, what would she think?'" Ingraham responded.

"She would say 'is this even the United States of America?' She wouldn't even understand how this is happening."

"Song lyrics should be evaluated and performed sensitive to the era of their creation, not distorted through the lens of contemporary political correctness or morays," Arroyo wrote.

For more from Laura Ingraham and Raymond Arroyo including their take on Kanye's new album and more, join Fox Nation and watch the latest episode of "Laura and Raymond," today.