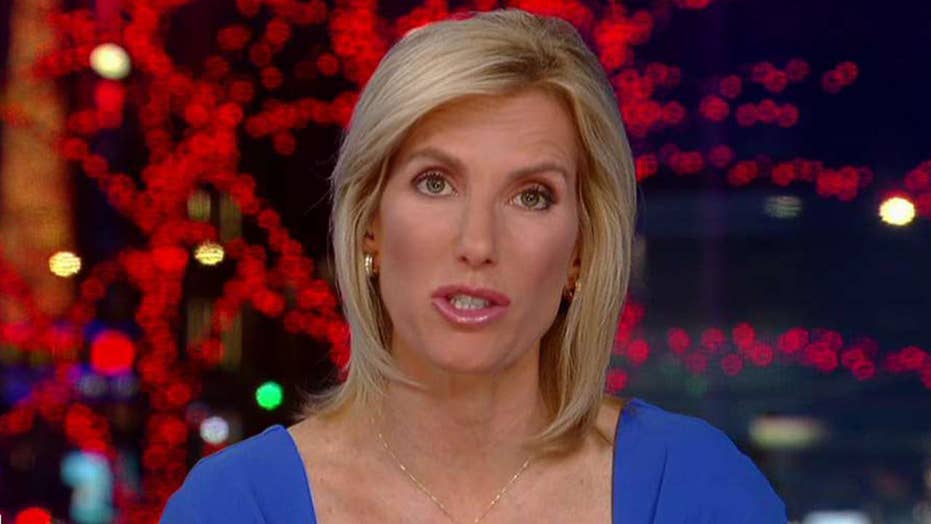 Ingraham: What if congressional leaders could be impeached?

Democrats should be impeached for abuse of power.

Laura Ingraham spent Tuesday asking the hypothetical question,"What if the Congressional leaders could be impeached?"

Ingraham said it would be "fun" to "proceed as if Congress is not immune from impeachment." The host of "The Ingraham Angle" brought up her hypothetical charges against Democrats.

"So let's say the GOP wins back the House next November and the tables are turned. What articles of impeachment could Schiff and the gang be facing?" Ingraham asked, before accusing Democrats of "abuse of power."

"House Intel Committee Chair Adam Schiff is the one who abused power. Now, his office met with the whistleblower in August," Ingraham said. "He didn't reveal this to anyone until he was caught, basically. And he still hasn't answered questions about what he knew and when he knew it."

Ingraham also charged Schiff with obstruction, "He can obstruct Congress by refusing to give Republicans their rights to call witnesses, including the whistleblower Adam Schiff, yes, guilty as charged."

Ingraham then took aim at House Speaker Nancy Pelosi for delaying any action on the USMCA agreement and other infrastructure legislation.

"Pelosi is doing harm to the country right now by withholding support for infrastructure and prescription drug bill," Ingraham said. "The bill to lower prices of prescription drugs affecting all of us. Her party campaigned on both of those issues again. She's doing this abusing her power merely for her own political benefit."

The host accused Democrats of being hypocrites.

"Well, you see the Democrats, as usual, are guilty of much of what they accuse Trump of doing," Ingraham said. "A rank abuse of power lying and with the added bonus of invasion of privacy, obstruction of Congress. I mean, think about it? The possibilities are endless."