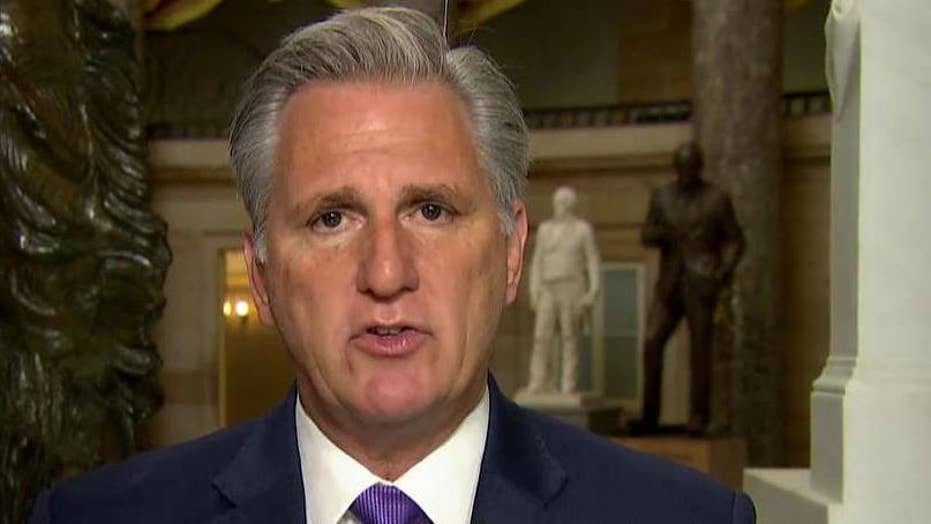 “They are cheapening impeachment. The real fear that you have here going forward is that this will be the new norm of Congress,” McCarthy told “Fox & Friends.”

“What Alexander Hamilton warned us all about [was] that a political party would capture this just to use it for their own political gain. Not about the rule of law.”

President Trump, in a blistering, no-holds-barred six-page letter Tuesday to House Speaker Nancy Pelosi, lambasted the Democrats' impeachment inquiry as an "open war on American Democracy," writing that she has violated her oath of office and "cheapened the importance of the very ugly word, impeachment!"

The president argued that Democrats were trying to distract Americans from the strong economy and historically low unemployment numbers, and pointed out that Democrats have openly called for impeachment since the day he took office.

Trump's letter came a day before House Democrats are expected to vote along party lines to impeach him, sending the matter to the GOP-controlled Senate for a virtually certain acquittal. Moderate Democrats in districts Trump won in 2016 largely have fallen in line in favor of impeachment, with only two exceptions.

McCarthy said a future Congress may even move to "expunge" Wednesday's vote from history, arguing it will be seen as the "thinnest, weakest, fastest" impeachment to ever take place.

He said he spent time with Trump on Tuesday and praised him for remaining "strong" despite the looming impeachment vote.

"Anybody else, this would be traumatic for them. I’ve never seen a man so strong, of everything else that he’s working on walking out, talking to individuals inside the Oval Office, going down to a party, flying to a rally today. He is focused on what the American people need," said McCarthy.

"That’s why we have a strong economy. That’s why we will come out of this. That’s why when you look at this at the end of the day, everything that [Pelosi] promised the Democrats, their poll numbers are lower, they are divided, Republicans are united, our conference will be stronger, theirs will be smaller and the president's approval rating is higher than its ever been."