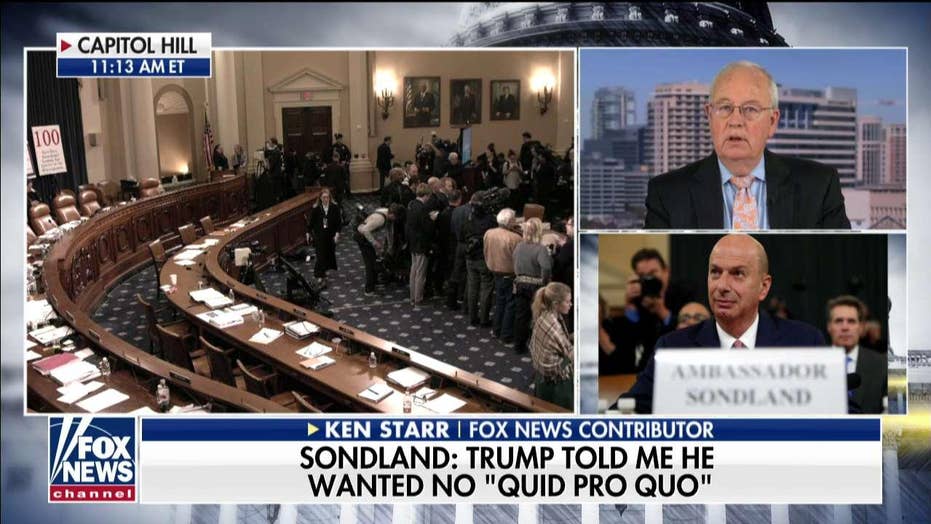 Ken Starr on Gordon Sondland's impeachment hearing testimony: 'One of those bombshell days'

Former Whitewater Independent Counsel Ken Starr said Wednesday that the testimony of Ambassador to the European Union Gordon Sondland all but guarantees articles of impeachment will be drawn up by House Democrats, and laid out what he believed to be House Intelligence Committee Chairman Adam Schiff's claim that he had enough proof for the House to impeach President Trump.

"Substantively, what we heard from the chairman just now, is, 'It's over. We now know' -- I mean, this is his position, 'We now know that the president, in fact, committed the crime of bribery, there's something of value.' That's litigable, but I think the articles of impeachment are being drawn up, if they haven't already been drawn up. ... This obviously has been one of those bombshell days," said Starr, predicting that the Democrats will now allege obstruction by the administration after Sondland testified that he was not allowed to access documents that could have aided his testimony.

"Everyone was in the loop. It was no secret," Sondland testified in his opening remarks, saying he believed there was a "potential quid pro quo" involving U.S. military aid to Ukraine and investigations desired by Trump – yet said he never heard that link from the president himself.

Starr said Sondland was "vehement" in his claim that he was denied "access to records to help him."

"We have now, a process crime, contempt of Congress, contempt of the House in the course of its impeachment," he said, adding Democrats will claim Sondland's testimony proves President Trump "committed the crime of bribery."

Earlier in the morning, Starr said through the first three days of testimony "the president had done extraordinarily well," since the witnesses had not laid out a crime. 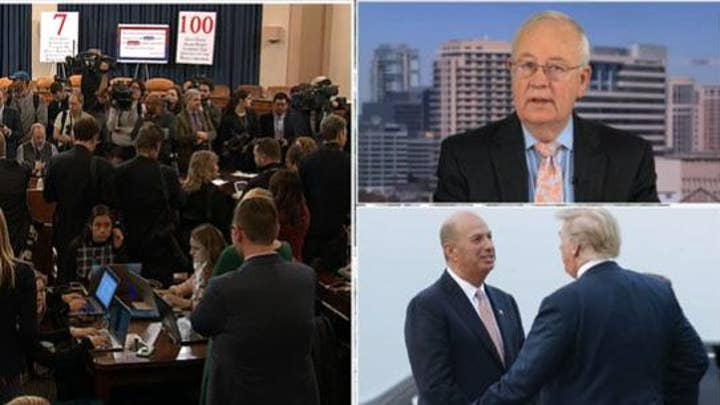 Starr said that the Tuesday testimony of Lt. Col. Alexander Vindman, who was "supposed to be very important against the president," faltered as "his credibility as a witness was seriously eroded throughout the morning."

"So, yesterday was a good day for the president. But, of course, all preceding, connecting the dots...All roads and all dots are leading to Gordon Sondland," said Starr.

After further questioning of Sondland, Starr said the case for impeachment remains "muddy [and] murky" and that removing a president should not be based on evidence that is "subject to interpretation." Starr also said it was a "shocking omission" for Sondland not to include in his opening statement the details of a phone conversation with Trump about Ukraine.

"President Trump, when I asked him the open-ended question, what do you want from Ukraine? His answer was 'I want nothing. I want no quid pro quo. Tell Zelensky to do the right thing.' That's all I got from President Trump," Sondland recalled.

The impeachment probe was initiated after a whistleblower filed a complaint about a July 25 phone call between President Trump and Ukrainian President Volodymyr Zelensky in which the president asked Zelensky to investigate Burisma Holdings and a widely challenged conspiracy theory that Ukraine interfered in the 2016 elections against Trump.

Democrats have accused the president of withholding an Oval Office meeting and almost $400 million in military aid from Zelensky as leverage to persuade him to pursue those investigations, which would have been politically beneficial to him.

Previous witnesses have testified that they listened to the call with concern, but could not substantiate allegations of criminal behavior.

Fox News' Tyler Olson, Alex Pappas, Gregg Re and The Associated Press contributed to this report.