Gingrich on H.R. 1, corporate criticism on GOP election laws: It's all 'corrupt'

Georgia's sweeping new voting reforms have drawn a firestorm of criticism from Democrats and even major corporations, with brazen comparisons to "Jim Crow" era restrictions that one fact-check called "incrediby disingenuous."

President Biden, who ran on a platform of unifying the country, called the new Republican law "Jim Crow on steroids" and endorsed calls to move the Major League Baseball All-Star game out of Atlanta in 2021.

A fact-check in The Dispatch, an online outlet founded in 2019 by anti-Trump conservatives, said the emotional "Jim Crow" language was misleading.

"[A]ttempts by prominent Democrats—including the president—to tie SB 202 to the Jim Crow era are incredibly disingenuous. For starters, the bill actually expands voting access for most Georgians, mandating precincts hold at least 17 days of early voting—including two Saturdays, with Sundays optional—leading up to the election," the Dispatch staff wrote. "Voting locations during this period must be open for at least eight hours, and can operate between 7:00 a.m. and 7:00 p.m. Several states (including Biden’s home state of Delaware, which will not implement it until 2022) do not currently allow any in-person early voting, and plenty, like New Jersey, offer far fewer than 17 days."

Actual Jim Crow legislation in the South in the late 1800s through the mid-1900s effectively disenfranchised Black voters, with such racist measures as poll taxes and literacy tests.

The new Georgia law, however, leaves in place no-excuse absentee voting, although it shortens the window to apply for ballots to 67 days. Other measures include preventing government agencies from mailing applications unsolicited, using driver's licenses or some other form of photo ID instead of signature-matching to verify their identity in absentee ballot applications, and codifying ballot drop boxes into law -- they were illegal in Georgia pre-pandemic but used in 2020 due to public health measures.

Other measures that have drawn liberal criticism include shortening the election runoff period in the state. Democrats Jon Ossoff and Raphael Warnock swept a pair of closely watched Georgia Senate runoffs on Jan. 5, more than two months after Election Day, swinging U.S. Senate control to Democrats.

The Dispatch also clarified an issue that's been a popular talking point on the left about distributing food and water to voters in line.

"One minor provision that’s received outsized attention is a prohibition on outside groups or people distributing money, gifts, food, or drinks to voters within 150 feet of a polling place or 25 feet of voters standing in line to vote. Polling places, however, can make self-service water receptacles available to voters waiting in line," the Dispatch wrote. 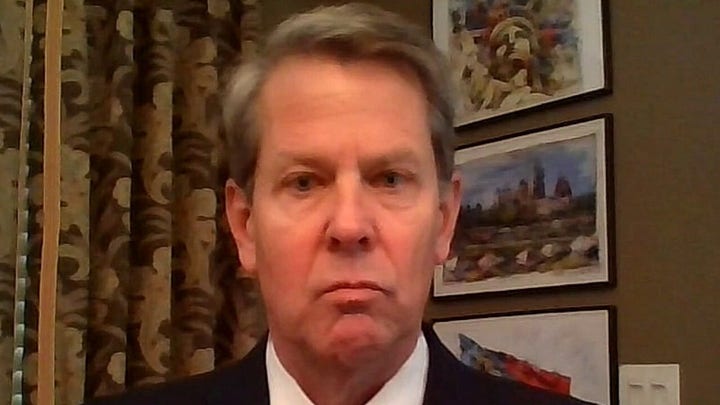 The Washington Post hit Biden with a "Four Pinocchio" fact-check for falsely claiming the Georgia law ended voting hours early, but other outlets have been more generous with Biden making brazen statements about the law or made wrong claims of their own.

In his interview with ESPN where he supported the All-Star game being moved out of Georgia, he repeated his falsehood about the the law "keeping working folks and ordinary folks that I grew up with from being able to vote," implying it cut off voting at 5 p.m. He was not corrected.

GINGRICH: BIDEN LIED ABOUT GEORGIA ELECTION LAW AND HE OWES THE PEOPLE AN APOLOGY

MSNBC aired Biden's false remarks on "Deadline: White House" Thursday without fact-checking them, and left-wing MSNBC host Nicolle Wallace praised Delta and Coca-Cola's CEOs for their opposition to the legislation after activist pressure.

"The technical term may be leading from behind but hey, we'll take it," Wallace said.

On the other hand, The Wall Street Journal editorial board condemned the corporate heads for what they called vague denunciations that suggested they hadn't read the bill in its final form.

"It is no different than Jim Crow, a poll tax with a different name and a different method," Lemon said March 25.

The Atlanta Journal-Constitution, Georgia's largest newspaper, was forced to make a correction in one of its own stories after echoing Biden's claim about limiting voting hours.

Georgia Gov. Brian Kemp, R., has faced criticisms from his left by Stacey Abrams and his right by former President Donald Trump over the results of the past two elections in the state. He has stood by the law as a means of protecting election integrity and challenged corporate CEOs over their opposition.

"It is obvious that neither President Biden nor his handlers have actually read SB 202," Kemp said. "As Governor, I won't back down from keep Georgia elections secure, accessible, and fair."

The legislation was in part a response to fierce Republican criticism of the handling of the 2020 election, where Biden became the first Democratic presidential candidate since 1992 to win Georgia.

Although Trump and his allies cried widespread fraud in the general election, no proof of any widespread irregularities was produced that would have reversed Biden's win. Dampened GOP enthusiasm over Trump's claims led in part to Ossoff and Warnock's upset wins over former Republican Sens. David Perdue and Kelly Loeffler.