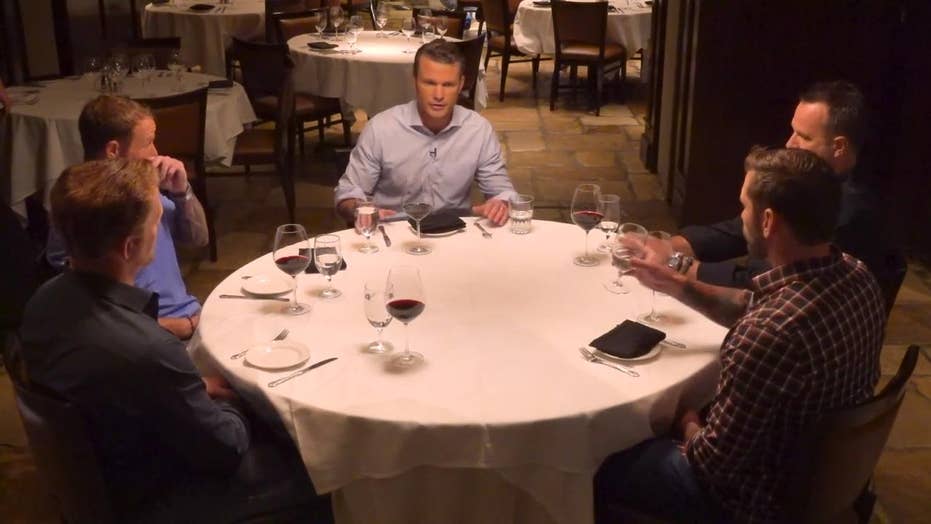 "Guys like you have been a part of missions, just like the one that killed Baghdadi," said Fox News co-host and former reserve military officer, Pete Hegseth, in a special edition of Fox Nation's "Modern Warriors."

"I'd be remiss if I didn't take the opportunity to take our audience inside the team room as you're planning for an operation like this."

"I was on one that went into Pakistan where we thought the chances of dying were pretty high," said former Navy SEAL Rob O'Neill, who is credited with killing Al Qaeda leader Usama bin Laden in a raid on his compound deep inside Pakistan in 2011.

"No one's panicking. If you say you're not scared, you're lying," he joked. "What an opportunity to go after this guy.  To fly with all your badass brothers into Syria after the head of ISIS. I'm getting goosebumps right now."

"The word I'm getting is they did an outstanding job," he continued. "I can hear the heavy metal music playing in the team room. A couple of hugs, a couple pats on the back and then, 'Let's go boys.'"

Former U.S. Army Ranger Mat Best, who did five deployments to Iraq and Afghanistan, before becoming a CIA contractor, said the immediate runup to the operation was likely, "pretty standard practice."

"You're going out every single night," he continued. "It's probably very similar to what you're already doing. It's just the stakes are a little higher...  I'd imagine that everybody's pretty amped up in the team room and ready to get it on.  The success of the [Baghdadi] mission and how it played out is phenomenal. I mean, those guys are heroes and we should all be very reverent of them."

In the course of the Delta Force raid, Baghdadi fled down a tunnel and detonated a suicide vest, killing himself and two children.

"How do you plan for people that are rigged to blow themselves?" asked Hegseth.

"You plan to get injured probably," laughed Best. "I mean, that's part of the courageous part of what these guys do is because you're going out there every single night knowing that you're facing an imminent threat. You know, and I look at special operations somewhat like a sports team because you have a plan. But the plan never goes according to plan and you've got to call audibles when you're on target."

Hegseth then raised the question of how much of a presence the U.S. should keep in war-torn regions of the world, like Syria.

"When you don't have an education system that allows young children to grow up and understand what quality of life is and how to treat people, and then you have Taliban -- ISIS coming in there and convincing them to believe in this fake ideology, it just doesn't stop," said Best, adding, "Wherever that sweet spot is as far as saving American lives, but also participating in the sanctuary and safety of our nation going forward -- internationally, I think that's the really complex hard question."

NAVY SEAL WHO KILLED BIN LADEN: WHAT YOU MISSED IN VIDEO OF AL-BAGHDADI RAID

O'Neill recalled that his personal experience serving in Iraq taught him that a U.S. military footprint can harm relations with local populations.

"We need to realize, no matter your intentions, if you're in a certain place for a long enough time, you're an invader and they're going to stop liking us. I remember tracking mud on a white carpet in Iraq in a dry hole, but there was a woman and child living there.  And I looked down at the mud of the carpet and I was like, 'I see why they hate us.'"

"Absolutely," agreed former Green Beret Scott Mann, who did four tours in Afghanistan and specialized in unconventional missions that required him to work with the indigenous populations.

Though Mann stressed that the U.S. must achieve a balance while staying involved overseas.

"If you look at the way Colombia has turned in the last couple of decades, a lot of that has to do with a long term, persistent presence of special ops, both direct action but also advisory," he argued. "My ask would be that politicians get to know this enemy and this narrative a little better and get to know our special ops capability a little bit better and exploit this amazing strike we did on Baghdadi. Let's not let another one emerge."

Mann concluded, by warning that America may come to regret it if the military completely abandons the world's most troubled regions.

"You may knock ISIS down really, really hard. But to think that that narrative is not going to rise back up and someone is going to gravitate to it again, I think it's delusional because that it will happen. So how do we take a longer view?"

To watch all of, "Modern Warriors" go to Fox Nation and sign up today.