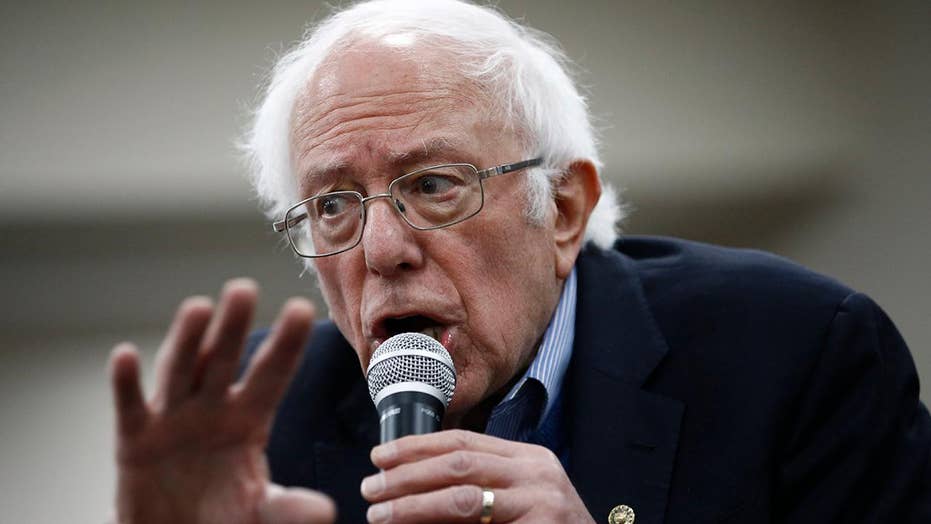 Are media overplaying role of fundraising?

Elizabeth Warren began sinking when the media belatedly pressed her on supporting a "Medicare-forAll" bill that would abolish private insurance for 150 million Americans.

But Bernie Sanders, who wrote the damn bill, emerged unscathed. Even when he candidly said middle-class taxes would rise, his momentum continued unabated.

The reason, in a replay of 2016, is that the press never really saw Sanders as a threat to win the Democratic nomination. He’s never gotten the kind of tough media scrutiny that other candidates—say, Joe Biden—routinely draw when they’re riding high in the polls. Bernie has been covered more as an entertaining ideologue, an eccentric uncle, a Larry David character, than a potential president.

SOME ON THE RIGHT DISSENTING FROM TRUMP’S APPROACH TO IRAN

That may be starting to change.

When Sanders led the Des Moines Register’s Iowa poll last week for the first time—never mind he was at 20, Warren at 17, Pete Buttigieg at 16 and Biden at 15—there was some collective head-slapping among the pundits and the pols. A nationally known Republican told me Bernie is crushing it even in more conservative areas of California. You could hear the murmurs growing louder: Could Sanders win this thing?

“Sanders Surges as Progressives Flock to Him Over Warren,” Politico reported yesterday.

But what will the Sanders candidacy look like if journalists start fully reporting on the implications of his democratic socialism? Or on all the controversial comments since his days as mayor of Burlington, including about Cuba and the Soviet Union? That could be a game-changer.

Look, you’ve got to give Bernie credit for raising almost $100 million last year, without big donors, and for bouncing back from an October heart attack. The 78-year-old senator has staying power and an incredibly loyal base. But he hasn’t really been tested by the media.

Bret Stephens, the conservative New York Times columnist and Never Trumper, is no fan of Sanders. But he wrote over the weekend that Bernie can win not only the nomination but the White House.

The prevailing view, says Stephens, is that “Sanders’s support has a hard ceiling: It may be intense, but it’s also cultlike and off-putting. Too many Americans know enough about socialism to want a president who wears the term proudly (even if he insists it’s of a more benign variety). He embraces nearly all of the same policies, like Medicare for all, that raised Elizabeth Warren high in the polls but are now dragging her down.”

Then comes the comparison to a former New York real estate developer.

Now it gets interesting. There’s a left-right convergence between Bernie and Donald in certain areas, from opposition to endless wars to disdain for the party elites.

“Depth of conviction? Check. Contempt for conventional norms? Check. Opposed by all the right people? Check. Running against a ‘crooked’ opponent? Check. Commitment to drastic change? Check. Like Trump, too, he isn’t so much campaigning for office as he is leading a movement. People who join movements aren’t persuaded. They’re converted. Their depth of belief is motivating and infectious.”

The president, taking note of the shifting dynamics, yesterday jumped on a minor spat in which the Sanders camp is saying Warren mainly appeals to better educated and wealthier voters.

Trump tweeted: “Bernie Sanders’ volunteers are trashing Elizabeth 'Pocahontas' Warren. Everybody knows her campaign is dead and want her potential voters. Mini Mike B is also trying, but getting tiny crowds which are all leaving fast. Elizabeth is very angry at Bernie. Do I see a feud brewing?” [Typos corrected.]

The Politico piece is pegged to Sanders’ endorsement by several liberal organizations, “as well as three lawmakers in the so-called ‘Squad’ and liberal-minded labor unions…Sanders’ team has argued that he is working to expand the electorate by bringing out unlikely voters and non-voters, particularly those who are young and working-class.” I suppose the AOC factor shouldn’t be underestimated in a Democratic primary.

Among other things, Sanders has refused to call Venezuelan strongman Nicolas Maduro a dictator; has called Benjamin Netanyahu a “racist”; has campaigned with congressional supporters of the boycott-Israel movement, and said China has done more to address extreme poverty “than any country in the history of civilization.”

“Sanders has been accused by members of both parties of not being tough enough on repressive socialist regimes,” the Post says.

But the candidate tells voters that he was against “the two major foreign policy blunders in our lifetimes…I marched against the war in Vietnam. I was a kid. As a United States congressman in 2002, 2003, I helped lead the effort to prevent us from invading Iraq.”

This is the first major news story of the season to envision what a Sanders administration would actually look like.

We can all play the game of predicting what would happen if Sanders wins Iowa and does well in New Hampshire, and how he would fare in states (starting with South Carolina) that have large black populations. We can all wonder if he would inherit most of Warren’s voters if she fades and whether that would eclipse Biden’s support.

But until the press actually takes a hard look at how a socialistic President Sanders would govern, and we see how he responds, this is all preseason jousting.