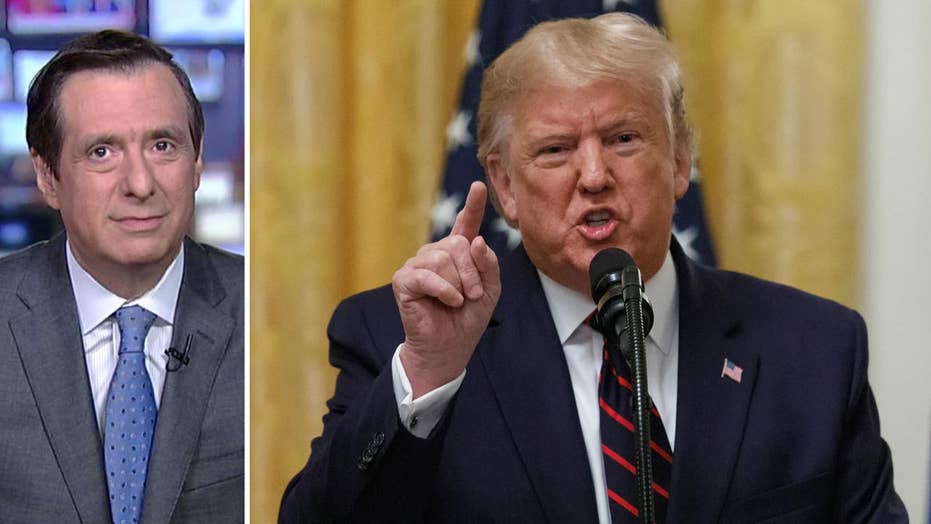 Howard Kurtz: Why President Trump is savaging the press - Except when he likes a story

'MediaBuzz' host Howard Kurtz weighs in on why President Trump Trump is referring to a possible impeachment as a 'Coup' and why he is now calling the press 'Corrupt Media.'

What’s happening now, he tweeted, is not impeachment, “it is a COUP, intended to take away the Power of the People, their VOTE, their Freedoms, their Second Amendment, Religion, Military, Border Wall, and their God-given rights as a Citizen of The United States of America!”

Leaving aside all the terrible things he says would follow his ouster, let’s be clear: This is not a coup.

Impeachment is a remedy contained in the Constitution after considerable debate by Alexander Hamilton and the other founders. Impeaching Donald Trump, especially on a party-line vote, may be dumb, reckless, blindly partisan or downright suicidal. But it is not a coup, even of the bloodless variety.

The president isn’t the only one using intemperate language. Maxine Waters, the left-wing Democratic congresswoman, responded to his “filthy talk” by declaring, “Impeachment is not good enough for Trump. He needs to be imprisoned & placed in solitary confinement.”

So much for due process or the formality of a trial. Waters is already picking out his jail cell.

I had barely finished writing these words when the president tweeted about the “Do Nothing Democrats,” saying they are “wasting everyone’s time and energy on [BS.”] Except he spelled it out.

Look, it’s hardly surprising that rhetoric is getting way overheated with the Democrats wielding a weapon that’s only been used against Andrew Johnson, Richard Nixon and Bill Clinton. But words matter, in political discourse as in life. And “coup” was no accident.

Trump obviously has every incentive to rouse his supporters by painting himself as the victim of dark forces, including the media and the Deep State.

And the critics can retire to their fainting couches when he retweets a phrase like “civil war.” Journalists use the term all the time, talking about a Republican civil war or Democratic civil war or some other war.

But coup is different, and so is calling for a congressman’s arrest. Trump yesterday called Adam Schiff a “lowlife” who should resign, saying he couldn’t carry Mike Pompeo’s “blank-strap.” (Suddenly jock is a dirty word?) He’s also ended a tweet about the House Intel chairman with: “Arrest for Treason?” (The supposed treason is that Schiff exaggerated Trump’s comments on the Ukraine call in what he said was a parody.)

Kamala Harris, trying to break into the news, is demanding that Twitter suspend the president’s account. There is zero chance of that happening, as the senator well knows. Can you imagine the backlash against the company, already accused of leaning left, for banning a commander-in-chief with 63 million followers?

Harris pointed to Trump’s postings in which he likened the intelligence whistle-blower to a spy and mentioned the word treason. “These tweets represent a clear intent to baselessly discredit the whistleblower and officials in our government who are following the proper channels to report allegations of presidential impropriety,” she wrote Twitter chief Jack Dorsey.

As for the fourth estate, the president told reporters he is largely dropping “fake” and will refer to them as the “corrupt media.”

Trump was teeing off on the Washington Post, but he was mistaken; the focus of his ire was a new book by two New York Times reporters, Michael Shear and Julie Hirschfeld Davis.

The Times story based on the book said that in private meetings Trump “often talked about fortifying a border wall with a water-filled trench, stocked with snakes or alligators, prompting aides to seek a cost estimate. He wanted the wall electrified, with spikes on top that could pierce human flesh. After publicly suggesting that soldiers shoot migrants if they threw rocks, the president backed off when his staff told him that was illegal. But later in a meeting, aides recalled, he suggested that they shoot migrants in the legs to slow them down. That’s not allowed either, they told him.”

Trump ridiculed the story as a lie and said it was “stupid” to ask whether he’d ever said such things. (Davis tweeted that the White House did not deny the account when twice presented with the details.)

The president then declared that he would largely retire his “fake news” formulation in favor of “corrupt news”—which, he added for good measure, is “truly the enemy of the people.”

That’s the latest sign of Trump’s frustration, after years of negative coverage, in the midst of an impeachment inquiry.

But here’s the kicker. When Fox’s John Roberts asked Trump about a just posted New York Times story that the whistle-blower told Schiff’s staff about his complaint days before filing it, he said he couldn’t believe the paper had written it and that maybe it’s getting better. When the president views a story as more favorable, he miraculously upgrades his opinion of the press.