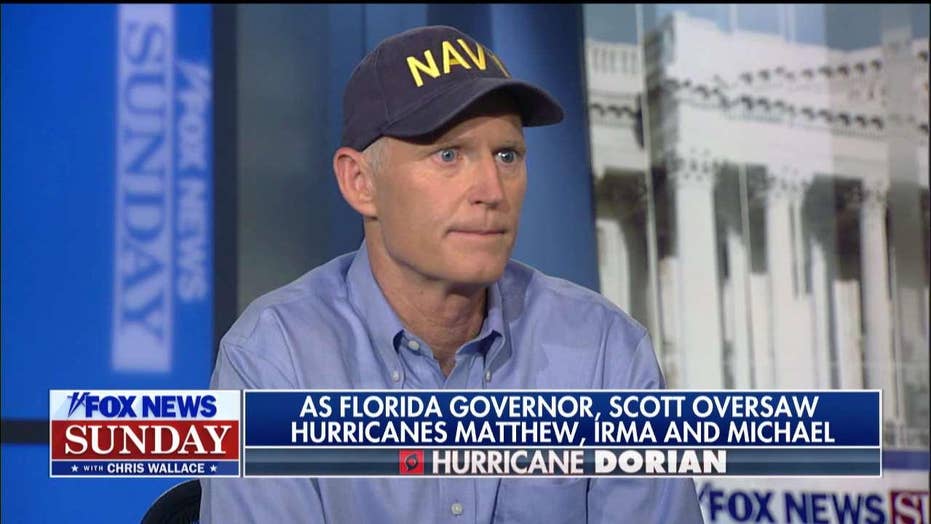 Sen. Rick Scott, R-Fla., weighed in on the claim that climate change has increased the strength of storms, and made them more deadly and dangerous, during an interview on

Ahead of Hurricane Dorian's imminent arrival, Sen. Rick Scott, R-Fla., weighed in on findings suggesting climate change has increased the strength of storms, during an interview on "Fox News Sunday."

Host Chris Wallace asked Scott if there was a connection between climate change and the increased potency of hurricanes, and he said the specific causes remained unknown.

"We know the climate's changing and we know our storms seem to be getting bigger," he said. "The last four years as governor, I had four of them. And now, we have them my first year out... we don't know what the cause is -- but we've got to react to it... We've put money into dealing with things like sea-level rise... we've got to continue to figure this out."

Scott told Floridians what they should do to prepare for the incoming storm, saying it's always best to overprepare and be ready for the worst.

"[Dorian] can still move right into Florida," he said earlier in the interview. "That's my biggest concern is, people are going to think, 'oh we're off the hook.' We are not off the hook," he said.

The former Florida governor also had advice for his successor, Ron DeSantis, R-Fla., as the current governor prepares to tackle his first hurricane since he assumed office in January.

"I've been talking to him. He's got a great team -- at the state and the local level," Scott said. "As governor, you need to listen, you need to stay ahead of it.

"As issues come up, every storm's a little bit different... I'm continuing to talk to him," he added. "I'm talking to his emergency management team. FEMA, I know is down there full-time... so he's got a good team around him. I'm sure they're all focused."