CycleBar Culver City and Santa Monica owner Steph Sklar-Mulcahy told Fox News that she is “not going down without a fight” in the wake of California Governor Gavin Newsom's latest coronavirus shutdown order.

Newsom issued a sweeping set of closures on Monday, closing bars, inside dining and, for much of the state, gyms, indoor church services and hair and nail salons in an effort to prevent COVID-19 cases from swamping hospitals. California recorded more than 329,000 cases and deaths topped 7,000. Hospitalizations have surged by 28 percent in the past two weeks, including a 20 percent increase in patients requiring intensive care.

Sklar-Mulcahy explained that on the same Monday Newsom issued the closures, she had a spin class scheduled for later in the day. Instead of closing again, however, she decided to pivot and move her bikes, DJ stand, and classes outdoors.

“What the government said was that we had to stop all indoor activities, but if it could be moved outside, that it would be OK, so immediately I switched gears,” recalled Sklar-Mulcahy. “By 5:30, we had a full class...people were just so happy, and really, for the first time in three months, I felt the joy from them and for myself.”

At the end of 2019, Sklar-Mulcahy’s Culver City CycleBar became the number one Cyclebar franchise in the world. Riding high on the success of her first studio, she decided to open up her second studio in Santa Monica in January 2020-- then the coronavirus pandemic hit the United States. 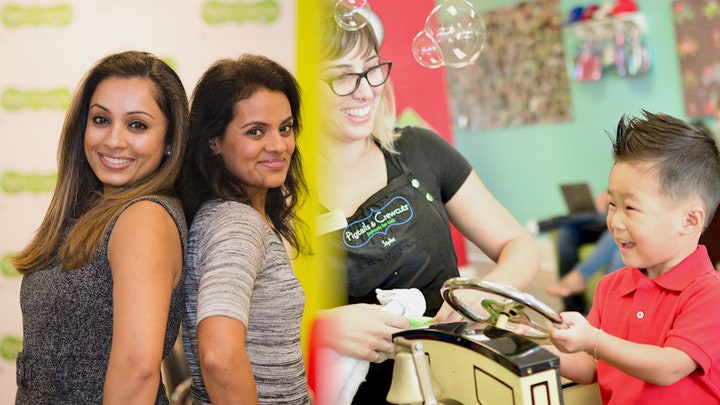 Sklar-Mulcahy’s spin studios typically hold 49 bikes each, and for the initial reopening, for social distancing purposes, the number of bikes was slashed between 26 and 20.

She created a  plexiglass shield to place in front of the instructor to limit exposure, as well as taking multiple deep cleaning precautions to ensure a safe environment for members and employees alike.

While Sklar-Mulcahy is only able to move 20 bikes outside, she told Fox News that she is seeing classes sell out and is attracting new riders to both of her studios.

“I’m going to fight to not close our doors, I love CycleBar, I love what I do, and I'll do anything to keep on going,” said Sklar-Mulcahy. “Obviously safely, I want to be part of the solution, not part of the problem, and so as long as I can keep people safe, we'll keep doing it.”