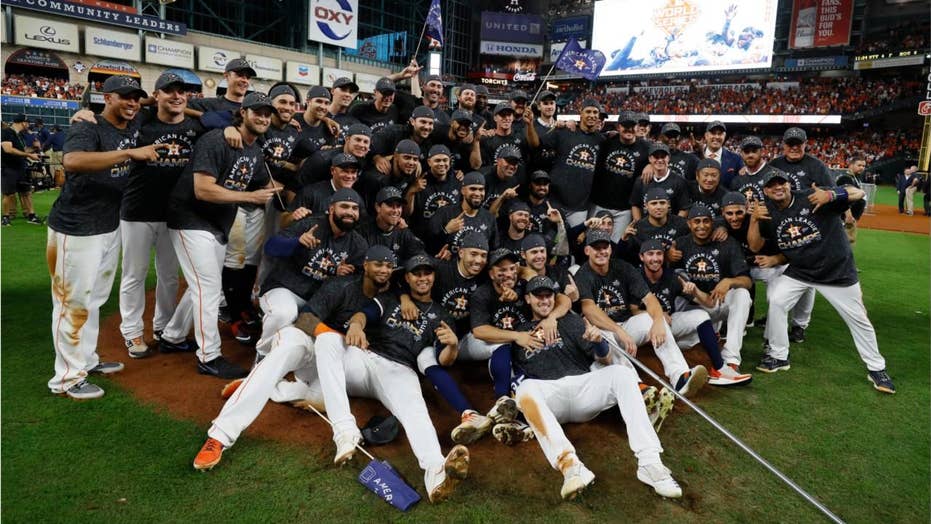 The Houston Astros defended one of the team's top executives after a ‘misleading’ Sports Illustrated report came out claiming the exec taunted three female reporters after their ALCS win against the New York Yankees.

Brandon Taubman, the assistant general manager for the Houston Astros, apologized for his behavior, indicating Sports Illustrated was correct in reporting he yelled at three female reporters.

"This past Saturday, during our clubhouse celebration, I used inappropriate language for which I am deeply sorry and embarrassed," he said. SI released a statement on Tuesday defending its reporter, Stephanie Apstein, after the Astros initially accused her of fabricating the story.

"Sports Illustrated unequivocally stands behind Apstein, her reporting and the story, which was subsequently corroborated by several other media members present at the scene," the publication said. "Any implication that SI or any of its journalists would ‘fabricate’ a story in its detail or intent is both disappointing and completely inexcusable."

He was referring to closer Robert Osuna, who allegedly assaulted the mother of his three-year-old child. Apstein claimed that one of the reporters was wearing a domestic-violence awareness bracelet. "None of those women were talking to him," Apstein reported. "They weren’t even talking about Osuna. Taubman brought him up."

Although Osuna faced suspension from dozens of games, the alleged victim dropped the charges and he was able to find a job with the Astros. He previously played for the Blue Jays but was traded, according to Apstein, as a way to up the Astros' game.

The Astros denied Sports Illustrated report. "The story posted by Sports Illustrated is misleading and completely irresponsible. An Astros player was being asked questions about a difficult outing," the team said earlier on Tuesday.

"Our executive was supporting the player during a difficult time. His comments had everything to do about the game situation that just occurred and nothing else -- they were also not directed toward any specific reporters. We are extremely disappointed in Sports Illustrated's attempt to fabricate a story where one does not exist."

In the statement released by Taubmann later on Tuesday, the manager apologized and said his "overexuberance" was misinterpreted.

SPORTS ILLUSTRATED SEES DRASTIC CUTS; 'HALF THE STAFF' IS BEING LAID OFF: REPORT

"In retrospect, I realize my comments were unprofessional and inappropriate. My overexuberance in support of a player has been misinterpreted as a demonstration of a regressive attitude about an important social issue," he said.

"Those that know me know that I am a progressive and charitable member of the community, and a loving and committed husband and father. I hope that those who do not know me understand that the Sports Illustrated article does not reflect who I am or my values. I am sorry if anyone was offended by my actions."