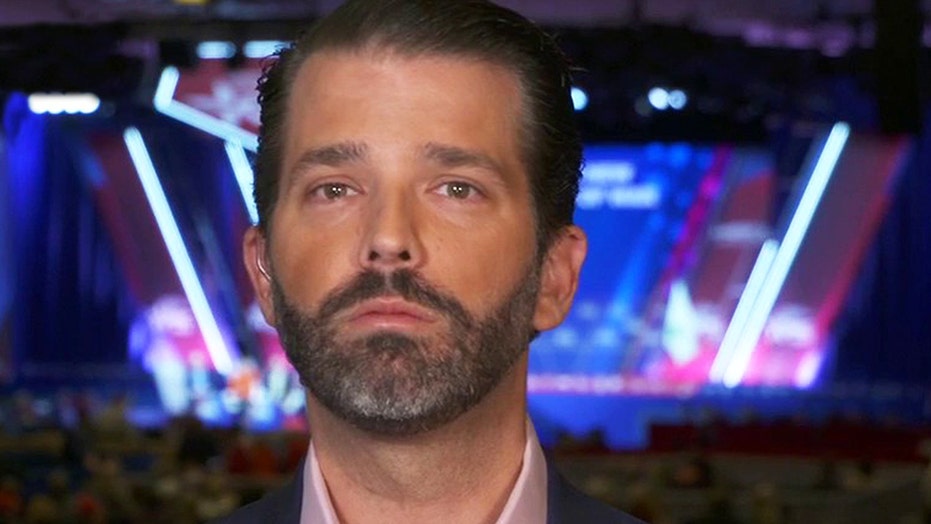 Donald Trump Jr. sounds off on 'Fox &amp; Friends' on Democrats and the left-wing media being infected by 'Trump Derangement Syndrome.'

Rep. John Garamendi, D-Calif., appeared to threaten Donald Trump Jr., the president's son, on Friday, warning that they better not be in close quarters or they could have a "serious altercation."

He made those comments on MSNBC while discussing the coronavirus. MSNBC anchor Hallie Jackson had asked the congressman about Trump Jr.'s argument that Democrats were hoping for deaths from the coronavirus so it could end his father's winning streak.

"I can assure you that there is not a Democrat or Republican in Congress that wants anybody to be sick," he added, before saying he was concerned about the administration's response to the virus.

COULD CORONAVIRUS HAVE AN IMPACT ON PRESIDENT TRUMP'S RE-ELECTION BID?

Later in his interview, Garamendi again warned that "Don Jr. better not get any place close to me. It would not be a healthy situation."

Andy Surabian, a spokesman for Trump Jr., demanded an apology in a statement to Fox News.

"The outrageous remarks from Congressman Garamendi were beyond the pale and should be universally condemned by Republicans and Democrats alike," he said.

"Almost as outrageous as the Congressman’s comments was the lack of pushback or condemnation from MSNBC host Hallie Jackson, whoes silence about political violence aimed towards a member of the first family, was truly deafening. By threatening Don Jr. with physical violence on national TV, Congressman Garamendi made clear to everyone watching that he is better suited to represent Antifa than the people of California’s 3rd Congressional district. He should apologize immediately."

NBC Universal did not imemdiately respond to Fox News' request for comment.

The president's son took issue with a New York Times op-ed which called on readers to label the coronavirus the "Trumpvirus."

Trump Jr. defended himself, retweeting a comment from conservative commentator Erick Erickson. "This from @DonaldJTrumpJr is completely accurate," Erickson tweeted, alongside video of Trump Jr.'s comments.

"The Dems first blasted Trump for overreacting to the coronavirus and now are blasting him for not doing enough. The Democrats want a coronavirus outbreak to help them politically."

Garamendi provided the following comment to Fox News: “My sole focus is on the health and safety of my constituents and all Americans. Donald Trump Jr. made the outrageous statement that Democrats want people to die for political purposes. If he wants to come to my office to explain his comments, my door is open. There is no threat of physical violence—but he can expect a strong verbal altercation."

He added: "I will continue working to ensure our communities have the testing kits and resources necessary to successfully address the Coronavirus crisis. I hope Donald Trump Jr. and the President will join me in this effort.”

"She wants to do the same thing with cryin' Chuck Schumer. He goes out and he says the president only asked for $2.5 billion, he should have $8.5 billion. This is the first time I've ever been told that we should take more. Usually, it's we have to take less," Trump said.

The White House is requesting $1.25 billion in new funding and wants to transfer $535 million more from an Ebola preparedness account — a move opposed by Democrats. The administration anticipates shifting money from other Department of Health and Human Services accounts and other agencies to complete the $2.5 billion response plan.

On Thursday, Schumer and Pelosi issued a statement calling for additional action in response to the crisis -- warning that "lives are at stake -- this is not the time for name-calling or playing politics."