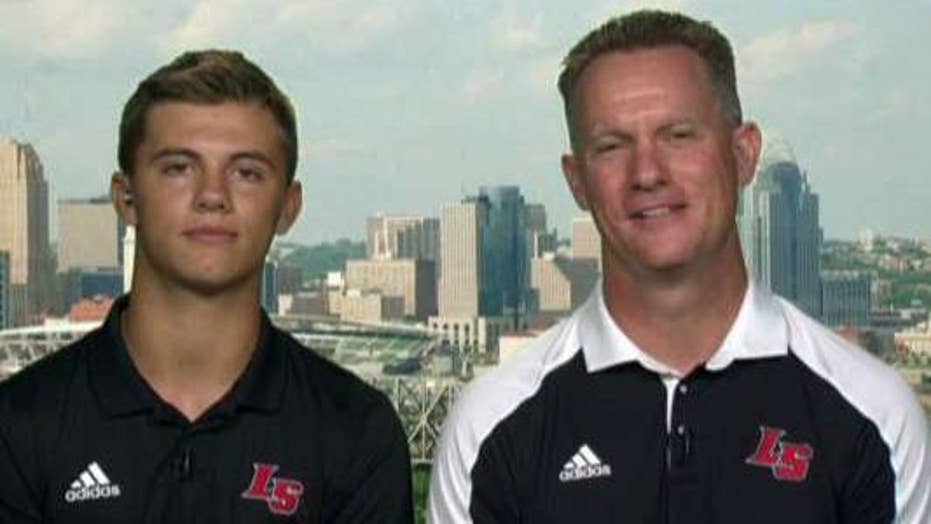 A Cincinnati high school principal whose football catch got his team a reprieve from practice and then went viral on social media described the catch as “incredible” on Monday.

“Who would’ve thought a simple kick and a catch would garner so much interest?” Aaron Marshall told “Fox & Friends,” where he appeared alongside Jake Siebert, the student whose long-distance kick he caught.

Seibert said traditionally the La Salle high school football team kicks a football to one of their players, normally a “lineman.” He went on to say “the only thing we switched up is, instead of having a lineman catch it, we had our principal catch it.”

TIM TEBOW CELEBRATES BIRTHDAY BY HELPING CHILDREN IN THE PHILIPPINES

Marshall was not expecting to be challenged to catch the football.

After giving a regular talk to the football team, he went on to say that the head coach of the football team challenged him to catch a football kicked by Seibert, an incoming freshman kicker to The Ohio State University’s football program, and, if he caught it, they would “have the afternoon practice off.”

“I told our coach, 'I can’t do that, coach,'” Marshall said. “We play a pretty challenging schedule and for me to catch it and give the team off, I don’t know if we’d be prepared,” he said.

Marshall said the coach assured him that the boys had been working hard and that they would use that time to study their playbooks and share some team bonding experiences.

Seibert said his football coach “knows that we’ll come back the next day working harder,” he said.