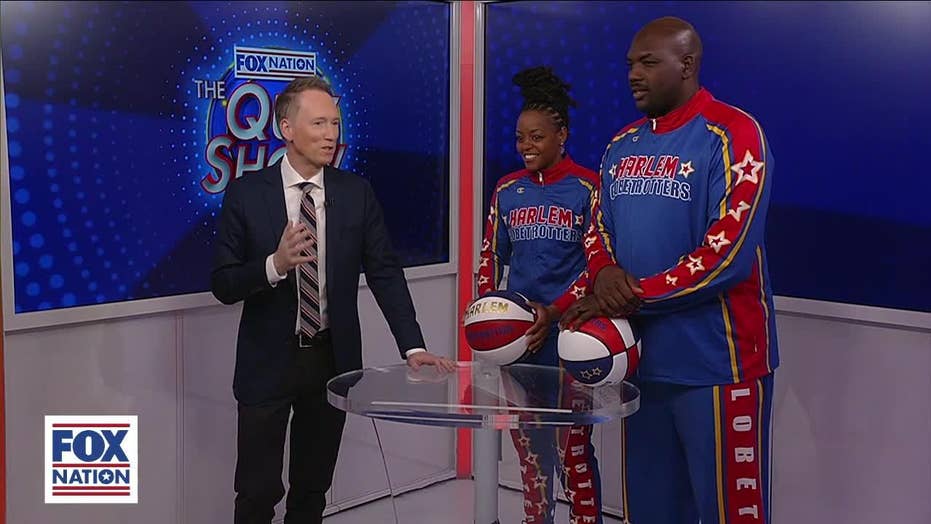 Harlem Globetrotters' trivia knowledge gets put to the test

Torch George and Big Easy Lofton of the Harlem Globetrotters joined the latest episode of Fox Nation's "Quiz Show" where host Tom Shillue put their knowledge to the test.

Showcasing their iconic tricks, the athletes attempted to teach Shillue to "palm the ball," but the host had a hard time.

"Good try, don't worry about it," Big Easy joked to a struggling Shillue.

The comedian and Fox Nation host had a slew of questions prepared, hoping to stump the athletes with "a trivia test about lunch and things that are purple."

A spectator gets involved during The Original Harlem Globetrotters Tour at The SSE Arena, London. (Photo by Steven Paston/PA Images via Getty Images)

The duo performed surprisingly well considering the off-the-wall nature of the questions, which included movie and film references.

When asked what they thought to be the most popular U.S. office lunch, the athletes guessed "soup and sandwich," but were incorrect -- according to Shillue.

"The answer is Pizza," Shillue corrected.

To see the full episode and for more TV personalities who have taken the quiz, visit Fox Nation and join today.