In a "Hannity" exclusive, investigative journalist Sara Carter sat down with Guatemalan President Alejandro Giammattei to discuss Vice President Kamala Harris' summit with him, as well as the state of the U.S. border crisis and how it is also affecting Guatemala.

Carter, a Fox News contributor, spoke with Giammattei shortly after Harris departed for Mexico; following what both liberal and conservative critics called a disastrous visit to the northern triangle by the California Democrat.

Giammattei told Carter that people are leaving Guatemala and being taken advantage of by the ruthless cartels and human trafficking "coyotes", in part because of mixed messaging from the United States. 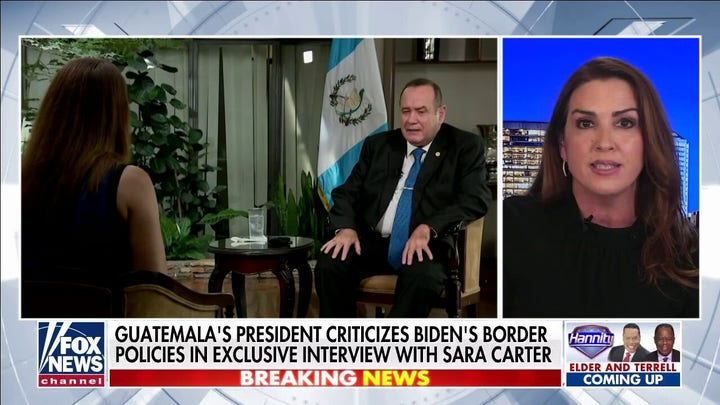 "He pushed back against the Biden administration… He said this border crisis is one of your own making. Don't put the blame on us," Carter recalled.

Giammattei said the U.S. should be clearer in its messaging, and that humanitarian messages have routinely been "distorted" by coyotes to flood the border with unaccompanied minors – and benefit financially in the process.

"What they said [in the US] is that they will promote family unification – so the coyotes took the children and teenagers to the U.S., and the order was full, not only with people from Guatemala."

"[That] is why our proposal is that messages should be clear," he continued, adding that Harris was firm in her "do not come" message given while speaking to reporters there.

"But if you have a lukewarm message, it only creates the opportunity to misinterpret," he cautioned.

Speaking with host Sean Hannity, Carter added that Giammattei wants bilateral cooperation with the U.S. that includes stronger federal charges against traffickers and coyotes. He said he is willing to institute that at home while in concert with Washington.