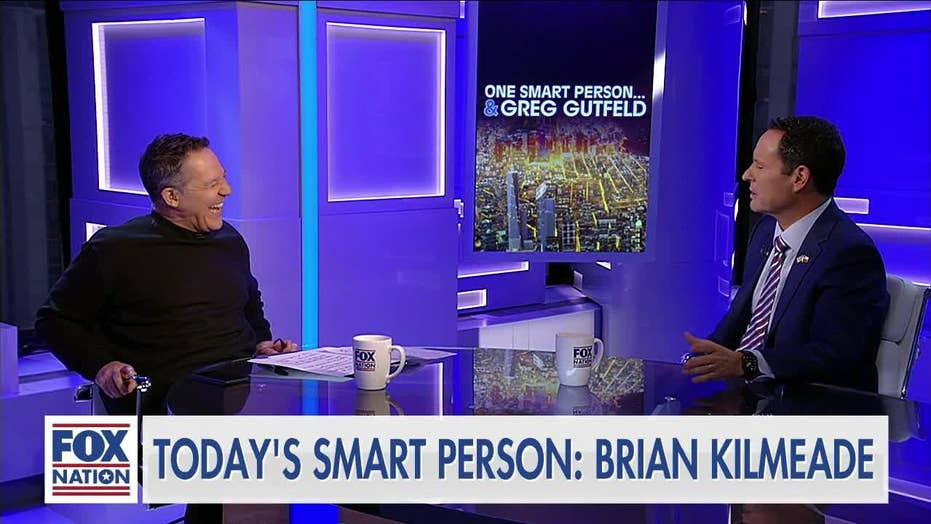 Greg Gutfeld and Brian Kilmeade: Why people think we hate each other

Fox News hosts Greg Gutfeld and Brian Kilmeade had a great time on Gutfeld's Fox Nation show joking about how some people think they don't get along.

"When I go on my sold-out tours," said Gutfeld, bragging about his live performances, "people assume that you and I absolutely have a problem with each other."

"It's great," agreed Gutfeld on his Fox Nation show "One Smart Person and Greg Gutfeld." "Especially, when you are on 'The Five' and I start insulting you and people are like, 'What did Brian do to him?' And if anybody asks, I go, 'It's too long to get into on Twitter."

Kilmeade joked that Gutfeld's putdowns have been more stinging when they're delivered in his absence.

"It's worse when I'm not there," Kilmeade deadpanned, "because I find out like two days later... I go, 'Woah, woah, woah, you mentioned me on Sunday? What was it in context with?'"

Kilmeade said he got the same reaction from some fans at his live shows.

"My third question's always like, 'So what's going on between you and Gutfeld?' and I go, 'We don't get along. He's jealous'... I never say that there's no problem."

Kilmeade was appearing on Gutfeld's Fox Nation show to discuss his new book, "Sam Houston and the Alamo Avengers: The Texas Victory That Changed American History," and they did eventually find the time to discuss it -- briefly.

"You are upsetting so many historians," Gutfeld observed, "because historians don't have morning talk shows, they're not going into your turf."

"There's no Meacham in the morning?" joked Kilmeade, an apparent reference to presidential historian Jon Meacham.

Turning serious for a moment, Gutfeld asked, "So, who is Sam Houston?"

Kilmeade said he became interested in Sam Houston while he was doing research for one of his previous books on President Andrew Jackson. Houston, who died in 1863, was a lawyer, politician, and leader in the Texas Revolution.

Jackson "mentored Sam Houston and they were buddies," Kilmeade said

"Wow," reacted Gutfeld. "That's like the male version of the Golden Girls."

To watch all of "One Smart Person and Greg Gutfeld" go to Fox Nation and sign up today.