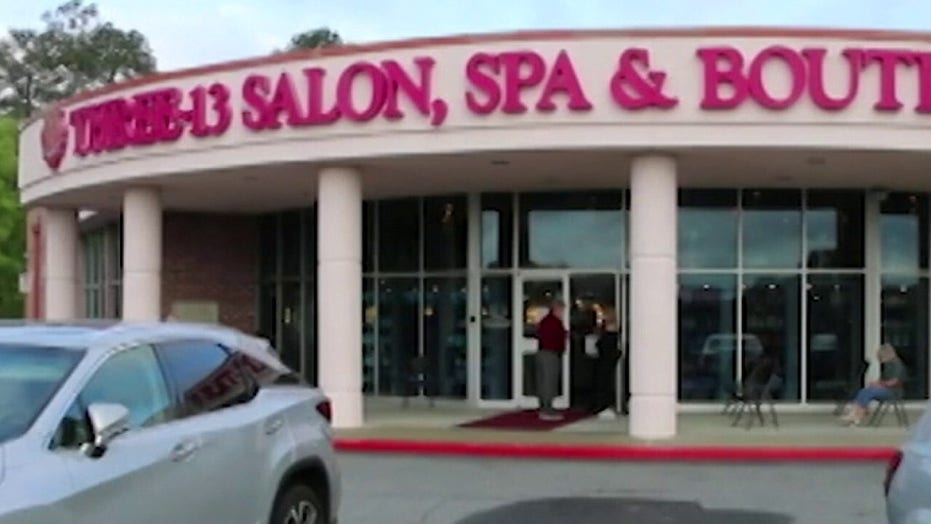 Hair salons, bowling alleys and tattoo parlors are among businesses allowed to reopen in Georgia.

Georgia hair salon co-owners Brooke McLaughlin and Julia Butler are "thrilled" to be able to return to work -- though the new normal at their business includes mandatory masks, temperature checks and rigorous cleaning.

The mother-daughter duo said they had a "soft" re-opening Friday at Taylor Brooks Hair Salon, with most employees set to return in a few days.

"It was really kind of a great way to get going again -- make sure that everything that we were doing ... [was] working smoothly for our staff and for our guests," Butler said Saturday on "Cavuto LIVE."

The salon is among a number of nonessential businesses in the Peach State that have been allowed to open, even as the state struggles to contain the spread of coronavirus.

"We're pretty excited. We've been planning on reopening our business since the governor shut us down back in March. So we felt pretty organized and pretty prepared for the reopening yesterday," McLaughlin told host Neil Cavuto. "We were just kind of waiting around for the go-ahead for a date specifically in mind. But we have been meeting with our staff and with our manager through Zoom, .. .and coming up with a game plan on how we were going to reopen and kind of gathering sanitation supplies throughout the month and everything."

While Republican Gov. Brian Kemp has extended Georgia's state of emergency until May 13 -- which enforces "shelter in place" orders -- he allowed businesses such as bowling alleys, gyms, tattoo parlors, spas, nail salons and movie theaters to start operating.

He announced the plan Monday and signed the executive order Thursday, laying out a series of guidelines for how the state would start to reopen.

FILE - In this April 16, 2020, file photo, Georgia Gov. Brian Kemp listens to a question from the press during a tour of a temporary hospital at the Georgia World Congress Center in Atlanta. Kemp plans to have many of his state’s businesses up and running again as soon as Friday, April 24. (AP Photo/Ron Harris, Pool, File)

Any business planning to reopen must enforce social distancing protocols and regularly check employees for signs of infection. However, Kemp has faced criticism for his decision, including from President Trump.

According to models and projections used by the White House from the Institute for Health Metrics and Evaluation at the University of Washington, Georgia should not consider reopening until mid-June at the earliest. Georgia has one of the lowest testing rates in the nation, with more than 22,000 confirmed cases and more than 900 deaths.

“I want him to do what he thinks is right,” Trump said on Wednesday during his daily White House press briefing. “But I disagree with him on what he is doing. …I think it’s too soon.”

"I (or @VP) never gave Governor Brian Kemp an OK on those few businesses outside of the Guidelines," the president tweeted Friday. "Spas, beauty salons, tattoo parlors, & barber shops should take a little slower path, but I told the Governor to do what is right for the great people of Georgia (& USA)!"

Kemp responded to Trump's criticism in tweets, saying, "I appreciate his bold leadership and insight during these difficult times and the framework provided by the White House to safely move states forward. Our next measured step is driven by data and guided by state public health officials. We will continue with this approach to protect the lives -- and livelihoods -- of all Georgians."

Butler estimated that her two salons had a few dozen customers total Friday.

McLaughlin said each customer must schedule an appointment and answer some heatlh screening questions.

"If their stylist is ready for them -- because we re-sanitize between each client -- then they will come up to the door and check their temperature and then they will put on their mask, sanitize their hands, and then they can enter the building to receive their service," McLaughlin said.