Jesse Watters pinpointed the man behind rising crime rates in some of the country's largest cities in his opening monologue Friday on "Tucker Carlson Tonight."

ARI FLEISCHER: CRIMINALS MAKING THE 'RATIONAL DECISION' TO MAKE THEIR MONEY IN CRIME

JESSE WATTERS: The New York of the early 1990s is back, and it's not just New York. Many of this country's biggest cities are going backwards in the same way the city of Philadelphia, my hometown, just set a new all-time record for murders. …This is happening all over the country. Louisville, Kentucky, Tucson, Arizona and Columbus, Ohio have also set new murder records this year, and with just under two months left in 2021, Indianapolis has broken its criminal homicide record for the second consecutive year. Cook County, which includes Chicago, just surpassed a thousand homicides for the first time since 1994.

What's the common thread linking all these cities? Look at who's funding the prosecutors. In St. Louis, Circuit Attorney Kim Gardner's campaign took more than $200,000 from a group backed by the billionaire George Soros. Soros knew what he was paying for. Gardner was open about her desire to stop prosecuting crimes. Two years ago, Garner declared, "We have to tear down the system. The system is going to do what it's going to do, and that is to cause harm. The system has caused harm by what is called mass incarceration." Gardner's followed through on that promise. Data from 2019 show that Gardner issued warrants for just 23% of the cases brought by the St. Louis Police. Soros has also funded DA Larry Krasner in Philadelphia, Kim Fox in Chicago and George Gascon in LA. There are no campaign finance limits on these local elections, so Soros is free to spend millions on them, and he's not the only one doing it.

WATCH HIS FULL MONOLOGUE BELOW: 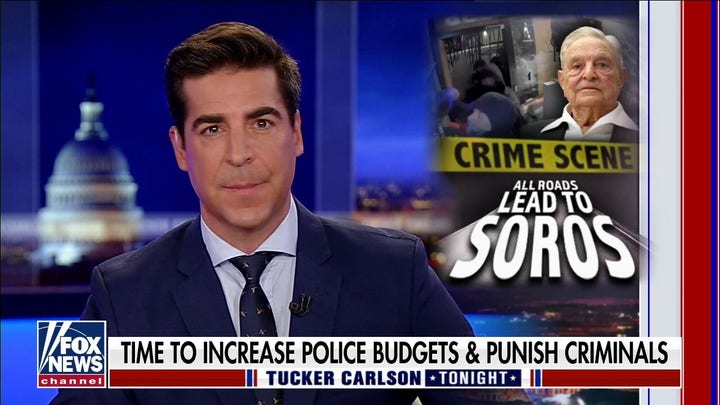