An enraged Keith Olbermann called for the dissolution of the Supreme Court on Thursday in response to its ruling Thursday that overturned New York's restrictive concealed carry regulations.

The far-left, ex-MSNBC host tweeted it has "become necessary to dissolve the Supreme Court of the United States. The first step is for a state the ‘court’ has now forced guns upon, to ignore this ruling. Great. You're a court? Why and how do you think you can enforce yourr rulings? #IgnoreThe Court."

Olbermann added, "f--- Alito, Thomas, Roberts, Gorsuch, Kavanaugh and the paralegal Coney Barrett," notably singling out the only woman who voted to overturn New York's law, and called them "House of Lords radicals pretending to be a court."

Olbermann's strong rhetoric brought intense mockery from conservatives, with online critics saying he sounded "unhinged" and also taking exception to his call for lower courts to ignore the ruling.

The Supreme Court Thursday ruled 6-3 that New York’s regulations that made it difficult to obtain a license to carry a concealed handgun were unconstitutionally restrictive, and that it should be easier to obtain such a license. All three of the court's liberal justices ruled against it.

The existing standard required an applicant to show "proper cause" for seeking a license, and allowed New York officials to exercise discretion in determining whether a person has shown a good enough reason for needing to carry a firearm. Stating that one wished to protect themselves or their property was not enough.

"In this case, petitioners and respondents agree that ordinary, law-abiding citizens have a similar right to carry handguns publicly for their self-defense. We too agree, and now hold, consistent with Heller and McDonald, that the Second and Fourteenth Amendments protect an individual’s right to carry a handgun for self-defense outside the home," Justice Clarence Thomas wrote in the Court's opinion, referencing two previous gun cases.

President Biden and New York Gov. Kathy Hochul, D., have also lashed out at the ruling, with Biden saying he was "deeply disappointed" and Hochul calling it "outrageous."

"Since 1911, the State of New York has required individuals who would like to carry a concealed weapon in public to show a need to do so for the purpose of self-defense and to acquire a license," Biden wrote in a statement. "More than a century later, the United States Supreme Court has chosen to strike down New York’s long-established authority to protect its citizens."

Olbermann is well-known for his melodramatic style and predilection for profanity when angered online, often referring to foes as "f---ing fascists" or "f---ing idiots." He was hardly the only liberal media figure upset by the ruling on Thursday, as CNN's Jeffrey Toobin ripped it as leading to there being no gun restrictions anywhere in the country. 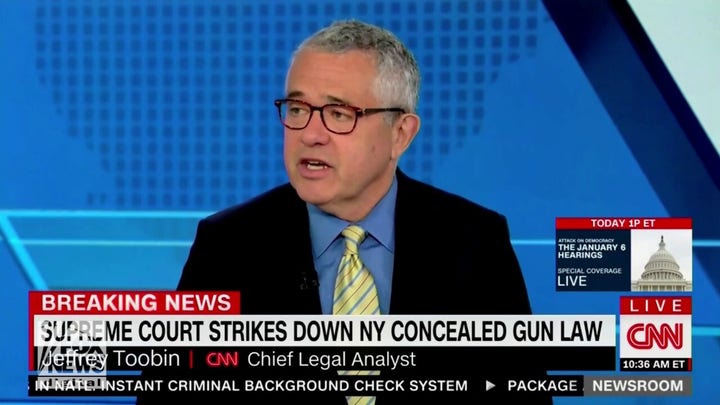 Olbermann, who became famous as a sportscaster for ESPN before his turn to politics, has been in media news for other reasons lately, as his ex-girlfriend Katy Tur has sounded off on their relationship in the 2000s while he was at MSNBC. Tur, now also an MSNBC host and promoting her new memoir "Rough Draft," told the podcast "The New Abnormal" this week that their time together "haunted" her, as she's often received criticism that she advanced in journalism only because of Olbermann's influence.

Tur praised him as "very smart" and also touted his "beautiful" scripts on "Countdown," the rabidly anti-Republican MSNBC program he hosted from 2003 to 2011. Tur rose to national prominence covering Donald Trump's 2016 campaign, where the then-presidential candidate sometimes needled her by name during his rallies.