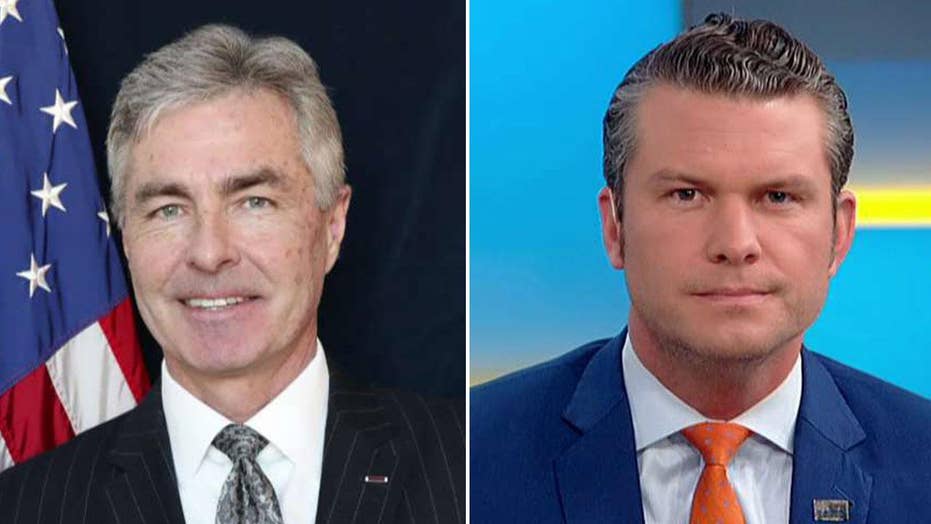 Hegseth to Pentagon officials: The Obama era is over. Understand that or see the door

Secretary of the Navy Richard Spencer tried to have it both ways with the Eddie Gallagher case and ended up getting fired for trying to run a "double game" on President Trump, said Fox News host Pete Hegseth on "Fox & Friends" Monday.

Trump intervened on the Navy SEAL's behalf after a San Diego jury sentenced Gallagher to a reduced rank and four months of confinement, which he has already served, for posing with the body of a dead ISIS fighter, which was considered the least serious of the seven charges he was facing.

The Navy then attempted to remove Gallagher's SEAL Trident pin as punishment, but the president objected and restored Gallagher's rank. When the Navy continued to pursue disciplinary action, despite Trump's objection, Spencer was asked to step down by the Pentagon.

"He was fired," Hegseth said. "What happened was... the Navy secretary tried to tell the president at the very end, 'Don't worry, we'll follow your intent. He'll keep his Trident,' while also telling Admiral [Collin] Green, who runs Navy SEALs, 'You continue with this process that the president clearly doesn't want.' The double game didn't work.

"The president found out about it and he was gone," Hegseth added. "They ignored the president's clear guidance. 'You're not taking the Trident. Get back to business.' This is a case that I care about because I care about the warfighter. And the Navy ignored the commander in chief's approach and Spencer paid the price for it."

Hegseth continued to criticize Spencer for his establishment thinking and expressed dismay at the overzealous prosecution of members of the armed forces, who find themselves in difficult life-and-death situations in combat.

"Spencer is an institutionalist. He wanted to... just bow to whatever the system was doing," he said. "Well, the system's controlled by a lot of bureaucrats who are invested in a prosecutorial system that's going after these guys. And Eddie Gallaher's been a perfect case for the president to highlight."

"Eddie Gallagher's kids were pulled out of their house at gunpoint in the middle of the night," Hegseth added. "He was kept in a prison with pedophiles."

Hegseth also claimed the prosecutors in Gallagher's case were unfairly hailed as heroes and accused them of singling Gallagher out.

"The prosecutors who lost his case got awards. The president had to take them away," he said. "He was acquitted. But then they still went after him based on the one charge that they had, and then tried to take the Trident away from him, even though he was the only one that they were taking it away from who was in the picture."

"From the beginning, this was overzealous prosecutors who were not giving the benefit of the doubt to the trigger-pullers, that's what the president saw," Hegseth concluded.

Trump is expected to nominate Ken Braithwaite, the ambassador to Norway, to take over as secretary of the Navy following Spencer's exit.